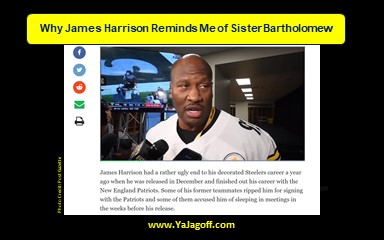 James Harrison returned, to screaming fans, to Heinz Field for a Super Bowl XLIII reunion.  During a Post-Gazette interview.

Harrison was asked what kind of reaction he gets when Steelers fans see him out around town. Have they forgiven him? “Forgiven me for what?” Harrison said. “I don’t need to be forgiven for nothing.”

When I see the video of James Harrison, I am instantly reminded of my Catholic school principal, Sister Bartholomew.  They’re built EXACTLY the same.  Sister Bartholomew’s most intimidating feature was a wart on her chin, that had so much wiry black hair stickin’ out of it, that I thought she had a baby porcupine stuck to her face.

What they should have written was, “Take only ONE and make sure it’s an apple because Sister Bart is watching.” We feared ol’ Sister Bartholomew more than we feared the good Lord himself.  God was SUPPOSED to have a beard but Sister Bart had a better one!!  So that fact that there was a note from God on the apples meant nothing.  The fact that Sister Bartholomew would be guarding the apples and cookies in a James Harrison kind of stance and had the same propensity to blow steam from her nostrils (even on hot days), meant we might pee our pants while in line if we took too many cookies.

Guess where those chocolate chips ended up?  Yep, my mom’s washer and dryer.  Guess what my punishment was?  She ripped one of my limbs off, beat me with it and then sent me to my room to think about what I had done.  Thankfully BigHeads hadn’t been invented yet because she probably would have put one of Sister Bartholomew in there to watch over me!!

OK…so we are all miserable and maybe even more shocked than Pens goalie, Matt Murray’s glove when a puck lands in it…, as I keep watching the PG video of James, I am indeed 100% certain that he is Sister Bart re-incarnated.

James…you were wrong for going to the Patriots….. Ya… umm…let’s see.. Ya Jag….ahhh…….wait.. he said he still lives in Pittsburgh??  James.. glad you’re not with the Pats anymore… YaJagoff (said in the friendly version just in case James is getting vibes from Sister Bartholomew on how to find my location!)