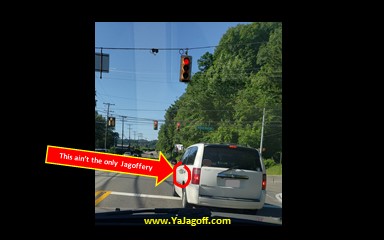 It’s cool to see that we are an outlet for people who come across Jagoff drivers! We are like the sounding board or maybe even blood pressure medicine for drivers frustrated by jagoff drivers.  Maybe we have even staved off an altercation or two because drivers say, “Why fight? I can post this !@#$@ on YaJagoff.com.

For example, this is the tweet that came with the photo above:

@YaJagoff Does this qualify as a jagoff? In between the turning lane and straight lane. Over the stop line. Driving erratically and slow. Cell phone in one hand and cigarette in the other.

Maybe they thought they were in one of those Uber driver-less cars? Can you imagine what’s gonna go on in THOSE things? Smoking, manis, pedis, building Legos, beach scenery puzzles, Sudoku, 67-card bingo games, building bridge models…. all while cruising through the strip district on a crazy-crowded spring Saturday morning.

Well.. the gas cap being open is indicative of the overall issue…drivers being totally submersed in everything OTHER than driving! Put the phone and cig down, put the ice cream cone between your knees, look out the windshield for more than 10 seconds, use those things called side view mirrors ever once in a while and then use that rear view mirror for more than a make-up or pimple popping or nose-checks for bats in the bat cave and pretend to drive like you know what the @#$@*!$ you’re doing… YaJagoff!

Thanks to Anthony Jones from Twitter for being today’s Honorary Jagoff Catcher!

We had so many entries And good comments, we did a raffle. The following two people from Twitter and Facebook have one t-shirts based on the raffle.

If that’s your name below, send an email to john@yajagoff with subject line, t-shirt. Send mailing address and size.