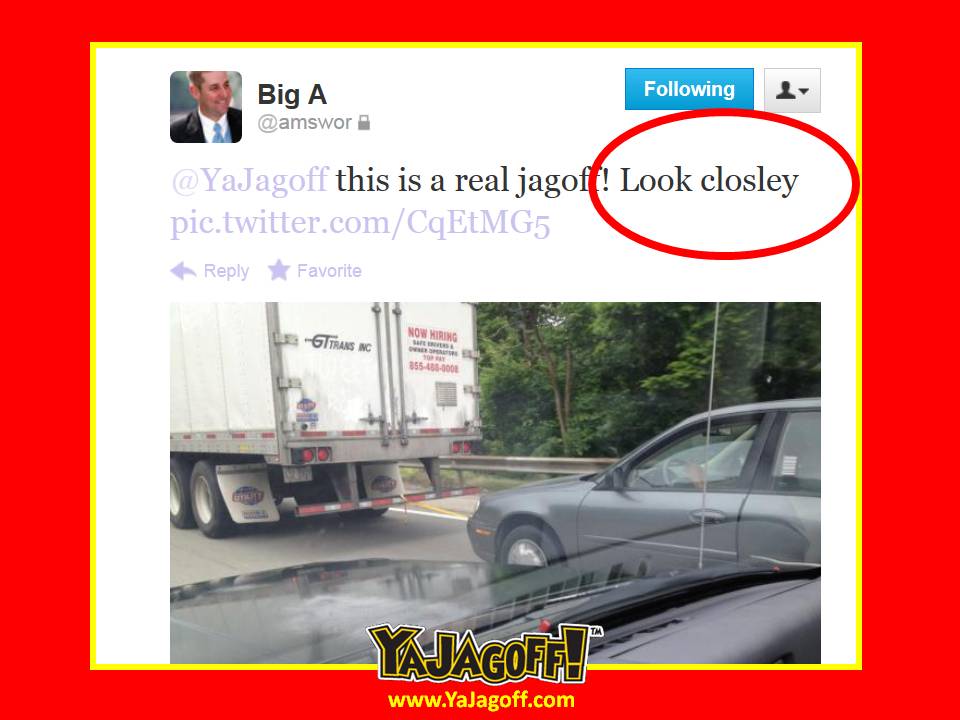 So at first glance, when we got this, we said, JEEEEZUZ look how close that car is following the truck.  If the truck stops, the driver’s gonna get a mouthful of bumper.

Then, being prompted by a follow-up tweet, we see the REAL reason this is an AWESOME Jagoff catch.

WHATEVER it is that is being used to tow this car along I-70 near the Yukon Exit doesn’t look very safe!  But the sign on the back of the truck says, “Now Hiring Safe Drivers Owners and Operators.”

Hiring safe drivers?  Maybe there’s an upcoming opening, at GT Trans Inc, (who’s phone number just in case you want to call it is 855-488-0008), for when THIS DRIVER gets promoted to Chief Safety Officer for his INGENIOUS MacGyver-type towing thingy device. (Be nice if you DO call to tell them their driver’s now famous on our website.)

What do we say?  What in theeeeee world do we say on this one?

Here’s a plausible explanation, maybe the guy driving the car had a bunch of text messages to get caught up on and, at the last rest stop, without the truck driver knowing, he secretly hooked his car to the truck!!!  Maybe??

Hey “Safe Driver” not sure what you paid for the “towing kit” at Tractor Supply but we’re pretty sure it wouldn’t tow a Tonka Truck!!!  All we’re saying is, please hurry up and get out of our State before that yellow bungee cord, piece of clothes line, electrical extension cord, grandma’s knitting spool, piece of chewing gum, tobacco slobber line or WHATEVER that is attached to your bumper, snaps and sends that car all “Clark Griswald-ing” down I-70, Ya Jagoff!

Thanks to longtime Twitter follower Aaron Sworden for being our Jagoff Catcher today.

Aaron has had other post here about his neighbors, check ’em out HERE!