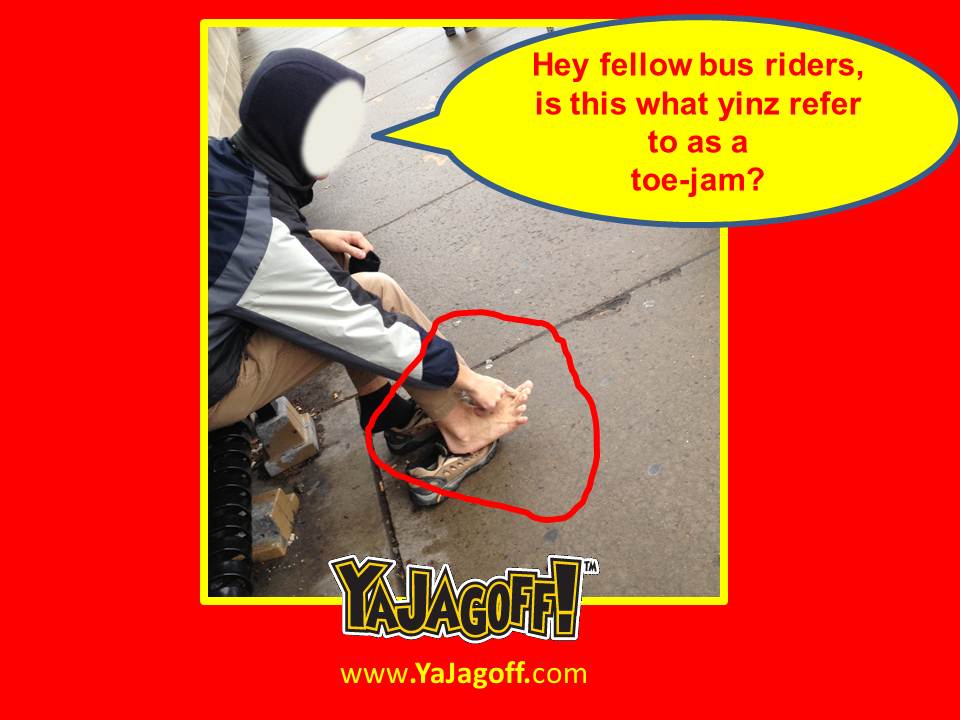 So you might be asking yourself, “Am I REALLY seeing what I’m seeing?” The same thing went through the mind of the Pitt Student that took the photo at an Oakland bus stop.

Picture yourself, you’re standing there waiting for the bus.  You absolutely know that someone is going to get on the bus with stinky food.  You are fairly certain that someone will get on with a STANKY coat.  But, you make a go of it because you’re a tolerant person and everyone has their issues. But you don’t expect someone touching the handrails with Toe-Jam Hands!

THEN.. while you’re standing there waiting for the bus, this cat takes off his shoe. Then takes off his sock.  And you think to yourself, “Maybe he got his socks wet?” You then come to realize this guy is running his fingers in and out between his toes… yep..no kidding….right there at the bus stop!

The good news is, we can verify that he did NOT sniff his fingers when he finished!  And yes, we can verify, this really happened.  We only showed a still photo of what occurred because video would have caused one of those He-gagged-and-caused-her-to-gag-Which-caused-ME-to-gag moments.

Hey Pedi-Pete-The-Port-Authority Passenger (say that 3 times fast), thanks very much for having the couth to NOT make this a “nail biting” post!!  We aren’t into scary movies.  But you did make us sit on the edge of our seat wondering if you were going to pull out a hangnail and use it as a toothpick to to clean the “Dirty O” chili bits out of your teeth.

This certainly is not the WORST thing anyone can see in the Oakland area but, we ARE certainly glad that it was the webbing between your toes that was itchy and not the crack of your arse, Ya Jagoff!!