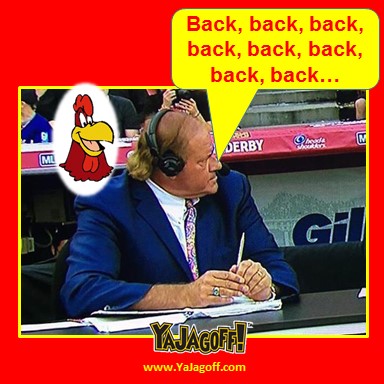 We wanted Chris Berman to get laryngitis.  My wish didn’t work out very well and I even made a wish by tossing money into the refurbished fountain at Point State Park!   Had I known that the costs of wishes had inflated faster than the Tooth Fairy’s standard rate (which is now like $5 per tooth), I would have been sure to toss enough coins in that thing so that it reflected the sunlight at airplanes.

His phony excitement  on every Home Run last night, screaming like it was the  five-year-old’s FIRST home run in the bottom of the 9th, with 2 outs in the seventh game of the T-ball world series…. the hit that got the entire team Fifty-Cents more than the OTHER team at the refreshment stand… outweighed his awful “I wish I was Hulk Hogan” hair do.

Every almost-home-run AND home run… the same yelling and excitement… “back, back, back….” clucking like a chicken.

Hey Chris…just in case you didn’t know…. this was a Home RundDerby… which means they’re ALL s’posed to be home runs, no big surprise….so SHUT THEEEEEEE HELL UP, Ya Jagoff!!

NOTE: Not sure about you but I was ready to ask for Cris Collinsworth to come in and do the announcing.  (O.K. maybe not THAT desperate!)