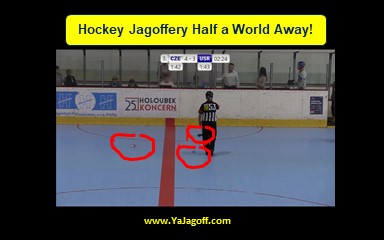 Today’s blog from our new Europe Correspondent, Rachael Rennebeck who is in the Czech Republic traveling for the International Ball Hockey Tournament.

(Photo above using the Jagoffestrator to highlight bottles thrown on the hockey dek ..by adults…where U16 players were playing)

During my trip to the Czech Republic, I found one similarity to Pittsburgh: they love hockey. Prerov was the city about two hours outside of Prague which hosted the International Ball Hockey Foundation World Tournament. This city saw representatives from seven different countries with athletes ranging from 15-20 years-old with skill and talent that exceed expectation.

While there was only that one similarity to Pittsburgh, there was a similarity to Philadelphia; well the Flyers at least. During a well-matched battle for the bronze medal, in the third period, the U16 Czech team started to fall like flies. They played an aggressive game from the opening buzzer, and when the USA started to return the aggression, the rules seemed to change. Bodies started to flop onto the dek…five or six to be accurate. Then after some kind of “magic spray” off the arena, each player miraculously returned…unscathed.

Americans were left head scratching the events unfolding, and then out of the pages of the Pens/Flyers rivalry game, cups and cans of beer began raining onto the arena floor. That is right, the Czechs began to knowingly and intentionally throw their beer—ONE kind that is a disgusting and tinny tasting ale I must add, onto the surface. Not once, but multiple times. If this is what they do during a 4-3 game with three minutes left, I can’t imagine what happens during a tie…or God forbid they are losing!

I can smile knowing I will be returning to the greatest country on earth, and most amazing city in the world where parking jagoffery and improper use of words make people jagoffs. Sianara magic spray using, beer throwing jagoffs. U-S-A!