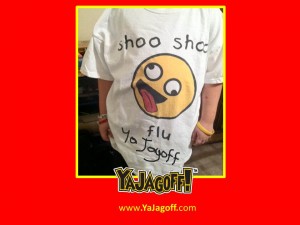 Hey Flu!!!!! So you invaded my life for 4+ days!!!!  All along, I received “secret cure recipes” from various Pittsburghers.

Then just when I thought that I wasn’t SICK ENOUGH, the Bronco’s Defense fell asleep and let the Ravens score some crazy long-pass play with hardly any time left in the game which well…you know what happened.  Then after that, the Texans fell star-struck to Tom Brady and the Patriots…it’s CLEAR why they didn’t call themselves the Houston TACKLERS… cuz they have no idea how to do such tasks!!!!

The one thing that FINALLY broke the fever and downward spiral of NyQuil land was the pic above sent over by one of our followers.  Now THAT is a shirt we all need to have!!!!!!

So flu, despite your best attempt cleanse me to the point that I was when I was first born, “All-Pink-On-The-Inside,” and your gallant charge to cook my brain from the inside out at 102 degrees over 4 days, basted with Gatorade, I am upright again, Ya Jagoff!!!

Thanks to Chuck E. Stugots, email list follower, for the pic and for being today’s Honorary Jagoff Catcher!!!!

In this article: Patriots Beat the Texans, Pittsburgh Flu, The Flu. Ravens Beat The Broncos