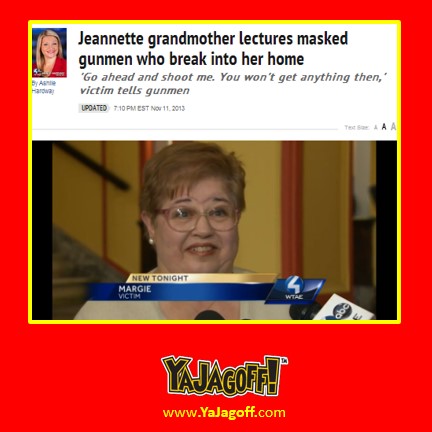 This is an awesome story about two Jagoffs!

The lady in the pic is Margie.  She lives in Jeanette, PA.  She was cooking some dinner and heard a crash… turns out, to guys broke through her window air conditioner.

My air conditioner was kicked through the window, and two guys were jumping through my window all dressed in black with guns,” she said. “I said, ‘What the hell are you guys doing here?’ They proceeded to tell me I had a safe, they wanted the money, they wanted the jewels I had and they’re waving a gun in my face.”Margie said instead of complying with their demands immediately, she told them what they were doing was wrong.”I’m just fed up with being taken advantage of and seniors being taken advantage of, and I started lecturing them like I do my son,” she said. “I think they were a little shocked.”After a few minutes, Margie said one of the suspects pointed a gun at her head. Police later discovered it was an Airsoft gun.

This is one of those events that turns out funny but really could have been a lot worse.  Margie was so fed up with these guys that she just gave them a good ol’ fashioned scolding.

Yes boys… smile for a mug shot!  You just go lectured by a grandma in you ninja suits, with your airsoft gun for trying to take stuff that you didn’t earn! 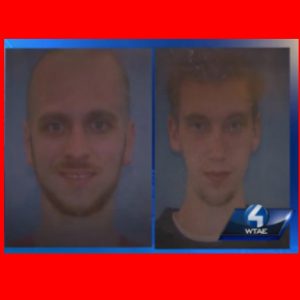 Look at these two guys…. right out of Central Casting for Home Alone Sequel #31.

Oh, and what made it so easy to catch you?  Sitting in a car a few blocks away from the house… brilliant boys!

Gotta tell ya, you grandma-robbers are lucky she didn’t pull out a paddle with holes in it and also give them a good ol’ fashioned ass-whooping… Sister Anecita Catholic Grade School style.  And as she would say, “That’ll wipe that smile right off of your faces,” Ya Jagoffs!!