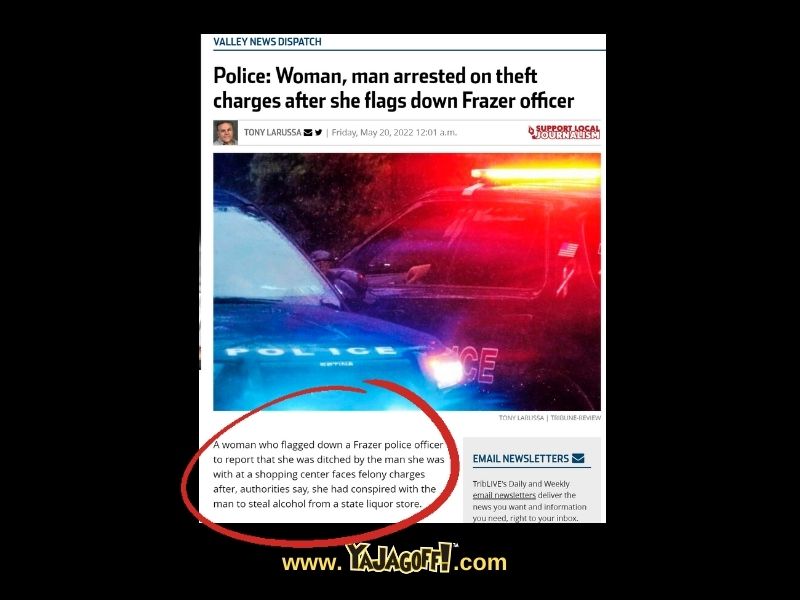 Just in case you cannot read the fine print on the graphic, here’s what it says:

“A woman who flagged down a Frazer police officer to report that she was ditched by the man she was with at a shopping center faces felony charges after, authorities say, she had conspired with the man to steal alcohol from a state liquor store. TribLove.com.

Short version: Jade _____ approached a patrolling police vehicle to tattle on her man that he left her at the Pittsburgh Mills Mall without a ride.  As she was complaining, a State Store employee cam out of the store behind them and accused Jade and her alleged man-friend had a shopping buggy full of $309 wort of alcohol.  Oh, and the alleged male friend, was trying to hide in this car by laying back in a reclined drivers seat.

Are Jade and her significant other, at least for the alleged robbery, in kindergarten? Like, did he think that if he covered HIS eyes, the other wouldn’t see him?  And Jade!  C’mon girl! You don’t have a girl-pal to call when you get left behind?  I mean, hailing the po-po car seems a bit extreme while you’re hands are still hot from an alleged good heist?  Ya spoiled collecting on all of your booty!

Jade ______ not sure when your next ALLEGED heist might be but, before ya do it, we suggest downloading the Uber or Lyft app.. just in case ya get dumped in the middle of the process again OR you should have just gone home and turned in your in novice-hide-and-seek-playing bud as the thief. You might OF gotten a reword of… well.. samples….. YaJagoff!