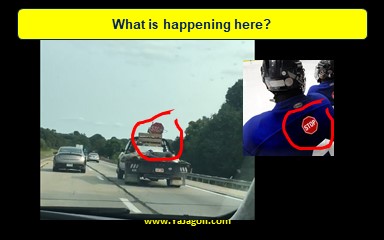 Here’s the email that came with the pic:

Was concerned about obeying the stop sign as much as we worried about it flying off and hitting us going 70 mph down route 79!

This sitch (“sitch” is the word that the younger generation uses to refer to a situation) could have been very interesting if this was at night.  Can you imagine following behind this stop sign in the dark as your headlights kept hitting it intermittently?  Haaa.. mind play!

But nothing like running down the interstate nervous that a loosely secured stop sign is gonna come flying at your head!  Wait…maybe this truck is so serious about not being “hit” that the driver decided to steal a page outta the youth ice hockey playbook? Smart!

But in the meantime.. that sign, rattling in the 70mph wind, is scaring the @#!* outta the people driving behind you… YaJagoff!

Credit to Joey Billhimer for being today’s Honorary Jagoff Catcher, who said,  “is that a stop sign in the middle of the HWY?”