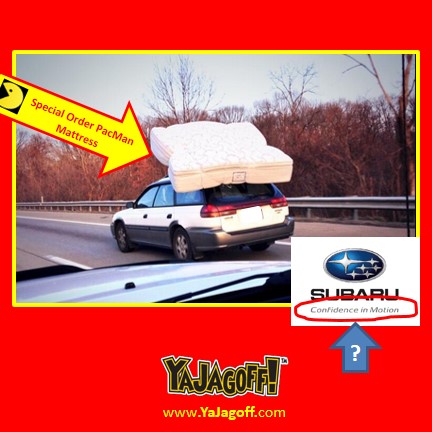 The the tweet that came in with this photo yesterday.. yesssssssss, yesterday, this is Breaking Jagoff News!!!  And it got the full royal treatment including the Jagoff-estrator!  Anyway, here’s the tweet:

Yeah.. me thinks the 18-wheeler, driving behind this guy on I-79, is potentially looking at a completely different idea of a SLEEPER CAB if that thing blows off.  And, since the car underneath is the size of a tricycle, it potentially could all just fly backwards into the oncoming truck’s windshield!!

Wait… maybe we are all being punked and this is a Subaru commercial to show how fuel efficient the cars are even WITH a mattress acting as a 45-degree wind-wedge!  What’s the over and under on 4 miles per gallon?

Do the Subarus now come with an external roof-top airbag in case of sudden rollovers and this one accidentally deployed?

Dude, face it, you’re driving a Subaru.. you should be sleeping on an AIR mattresses and sleeping bags, not real mattresses.  (Yeah, I just stereotyped there and it probably wasn’t fair.)

You pay to have pizza delivered!   For crissakes, pay the extra few bucks and get the thing, that you’re going to sleep on the next 10 years, delivered so we’re all not having to leave as much space behind you on the I-79 as we do for the old guy who farts in the Walmart check-out line, Ya Jagoff!