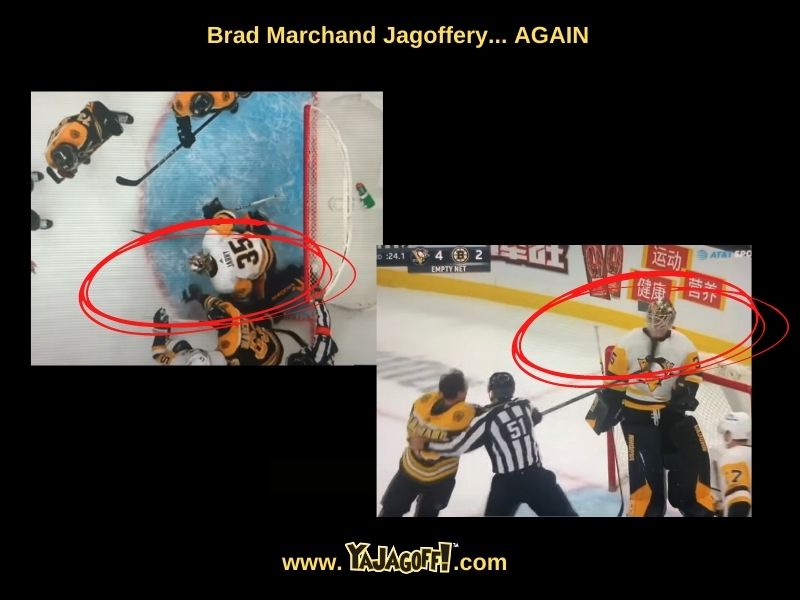 In case ya missed it, last night’s Pens vs. Bruins game featured Brad Marchand taking on his typical role of being a complete moron. As the game was ending, he sucker-punched the Pens goalie, Tristan Jari and also hit him in the facemask with his stick… waved it like he was a Harry Patter fan with a brand new toy wand.

The bad news is, none of the Pens went after Marchand for Jari-revenge.

As I am writing this I want to be sitting outside PPG Paints Arena and wait for him to come out. B-boy, if we could get ahold of you, we’d go all I-have-to-pee-and-haveI-been-driving-behind-a-dozen-dump-trucks-and-then-got-stuck-behind 3-senior-citizen-drivers-who-had-dogs-on-their-laps-and-were-trying-to-figure-out-how-to-scroll-to-the-weather-app-on-their-flip-phones-while-driving-in-the-passing-lane-and-one-of-them-is-the-person-that-I-got-stuck-behind-at-GetGo-while-they-were-playing-451-variations-of-the-daily-number-because-of-last-night’s-dreams kind of CRAZY MAD on you.. YaJagoff!