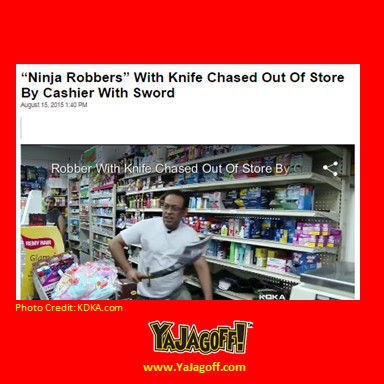 Another stupid criminal.  If you go watch the surveillance video on KDKA.com, you’ll see that one of the two robbers of the Perry Market, was dressed as some kind of Ninja and brandished a sword.  Which, at first thought, doesn’t seem to be all that smart if anyone has seen the old Raiders of the Lost Ark movie…brought-a-knife-to-a-gun-fight scene.

Be that as it may, the robbers had a sword but….. the robb-ee had an even BIGGER sword and scared the living $h1t outta the two robbers.

If you haven’t clicked the link above to watch the video, you should.  It’s hilarious to see the “ninja” running as if he was trying to catch the last 61C bus to Oakland from downtown at 1 in the morning on a sub-zero winter night.

(Side note: Don’t you think it’s cool that a sword fight robbery was done at the… wait for it….PERRY Market…like PARRY as in fencing parry riposte?)

(Yeah… my parents are proud!)

To the robbers (who will more than likely be caught since the Ninja guy didn’t have any black Ninja shoes so he wore black socks on his feet which he subsequently slipped on during his escape)…“He who robs by the sword… DIES, or goes to jail, by the sword……YaJagoffs!”

Thanks to @ViewFromAskew for the tip!!