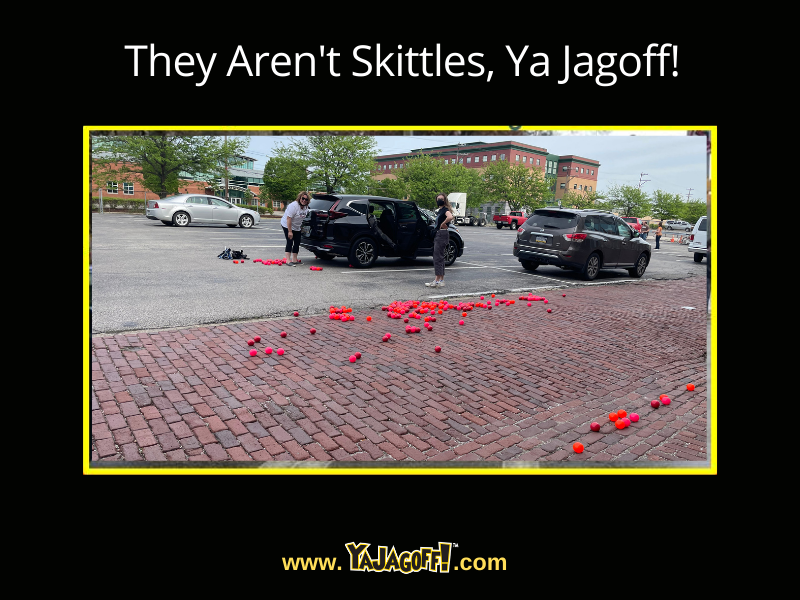 DISCLAIMER** I am not outing myself as a jagoff because John did it last week over his made-up parking space.  This is because the scenario almost sounds made up, and onlookers took photos….so I had to beat them to the write-up. After all, it is my screw up, ya jagoff!

Here is the setup: John and Rachael borrow a 2021 Honda CRV from Rohrich and filled it with multiple hockey balls for a fundraiser.  John decides he may want to purchase the hybrid with all the bells and whistles, so he is encouraged to drive it a bit while being used for the fundraiser.  Little more description? The tons of hockey balls that look like a sea of skittles in the hatch are comparable to the old how many jellybeans in the jar contest.  I filled this hatch on Tuesday. I knew the balls were there.

Without thinking, I wanted to load the chairs and podcast bag into the car after working in the sun.  Thinking about what to make for dinner, what the hell is in my shoe and who sang Electric Avenue, (my first album by the way) I open the hatch without hesitation and the balls rolled.  Like clock work, on-lookers took pics before asking if I needed help as I stood at the hatch holding it sorta shut, but not really because I couldn’t really shut it since the balls were in the way .

Can’t make this stuff up. Notice I didn’t cough up how many balls were in the hatch, ya jagoff!