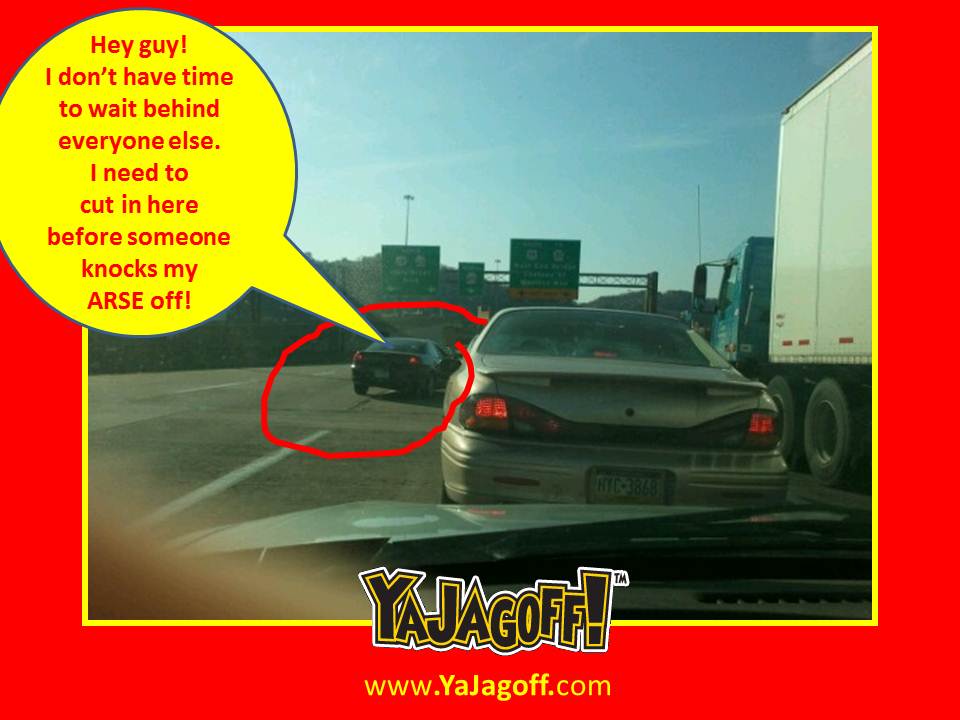 So everyone is headed home from a busy work day.  And the simple facts are, if you drive out of downtown Pittsburgh between 3-6pm, you know to expect traffic.  And, while you want to get home as fast as possible… some days faster than others to get the kid to soccer, get dinner started or simply to put your feet up and rub your corns and relax… the reality is ya just have to sit in traffic.

Unless you’re the character in the pic above….

This statement was submitted to us with the photo:

So this guy doesn’t feel that he has to get in line behind everyone else that has to get home…he passes the line then sits steady until some softy lets him in.  At THAT point, we’re not sure who is the bigger Jag.. the softy that lets the guy in, the person looking down at their phone not keeping up with the traffic ahead of them, that he cuts in front of OR the guy doing the line-cutting.

And yes, we understand that this COULD be some poor soul that is lost OR, EVEN WORSE, listening to their iPhone mapping app that takes about 6-hours to update itself after you move 22-feet.  But we’re not giving the benefit of the doubt here cuz we are not, www.GiveJagoffsTheBenefitOfTheDoubt.com.

Hey line-cutter…..you’re lucky that our grade school nun, Sister Anecita didn’t see your move.  She would have gotten out of her car, walked up, pulled you outta the car and then proceeded to twist the short hairs on the back of your neck causing pain as if she was pulling your spine out through your neck ..(just like she used to do when someone jumped the line to get their afternoon chocolate milk after recess.)

All that we know is this.. we absolutely HATE when we see backhoes or other heavy equipment in rush-hour traffic but we would make an exception in this case.  And, Mr. Line Cutter, if we would have seen you cut into the lane, we would have prayed that, once you DID get over,  you got stuck behind a backhoe, an uncovered tri-axle dump truck with bad shocks and full of animal manure which was behind a garbage truck that just took on a load of sour milk and vegetables, a car with a 50-year member West Penn AAA bumper sticker being driven by an elderly person going home from cataract surgery, which was behind a 75-car funeral which was being held up by ANOTHER driver like you who was holding up traffic trying to jip a line while you were trying to rush home to a bathroom because you had to pee worse than Austin Powers after he was defrosted, Ya Jagoff!

Special thanks to @mdauer08 from Twtter for being our Honorary Jagoff Catcher for today!

THANKS TO ALL OF YOU THAT READ THIS BLOG!

PLEASE TELL AT LEAST ONE FRIEND ABOUT US TODAY!