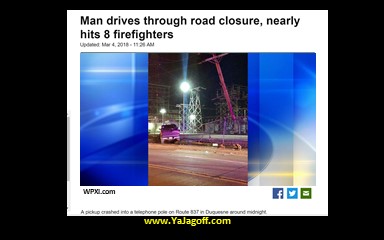 Yep.. it’s true! But it is not what you think!  According to the Duquesne Police FB page, the emergency crew were tending the crash in the pic.  Then, another driver, by the name of.. wait… nope…but another driver drove through the temporary barricades then weaved around a fire truck and 8 fire fighters.  “The driver was not drunk or high. The driver stated that he didn’t realize that the road was closed.” Oh… fire trucks, flashing lights, maybe some cones.. who knows?  But, he had to slalom around all of them and a few firefighters like a Peon-Chang alpine skier.

“Oh.. what have we hear? Flashing lights and highly reflective clothing… I guess I’ll drive right on threw if ya don’t mind?”

“The driver was taken to the Allegheny County Jail charged with eight counts of recklessly endangering another person and a list of traffic offenses.”

Well, 59-year old anonymous man, at this point you might want to claim drunk or high because, there’s not much of a tolerance for this stuff in court under the “I’m a rude a-hole,” “I’m just stupid,” or “Sorry, I was thinking about this morning’s Sudoku puzzle” defense!  Ya might wanna get yer bobs and weaves (and we ain’t talking hair salon stuff) before ya get to trial.

Our free legal advice… tell them you have special privileges and ID tags.  Tell them that you were paged, as a specially trained Pokemon Go character first responder, to check out the wrecked pickup because you heard that MewTow and Dragonite had been inside the vehicle! OK, it’s not full-proof but, hell, it HAS to be better than, “I had my head up my a$$” defense.. YaJagoff!