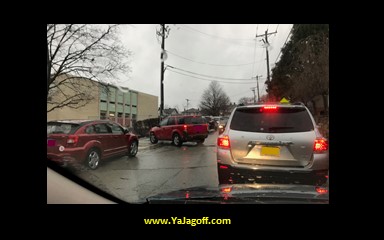 We live four-and-a-half minutes from the elementary school. That is 270 seconds, and granted on a good day, but on a traffic-induced trek it may take seven minutes.  That is enough time for an Ed Sheeran ‘Perfect’ listen for the third time in the morning.  But as soon as there is a school delay, everything changes. That short jaunt to school becomes a traffic-laden mess.

Last week, somehow our easy commute seemed like we were navigating to Ross Park Mall on Black Friday on the best sale in decades. A record 10 minute drive to the school parking lot, and then the real wait began.  The snow had already begun its melting process, there was no ice, and no accident, so what was the hold up? It must also be mentioned that I have received updates from the school as a reminder of how to properly enter the school yard during drop of times, but never did I think it was because these parents create a bumper car arena upon entrance.  No one lets each other go–no!  It becomes a brake and gas process to edge up to enter the drop off area.  In fact, these cars refuse to move for the school buses to maneuver through.  They beep and shake their fists–I am serious.

Admittedly I throw out a ‘jagoff,’ or a really? when driving, but I think having started working with John on a regular basis caused my anger to accelerate like the car-smoking mom behind me who didn’t like my driving skills. Also admittedly, I don’t have John’s finesse of equally irritating drivers who irritate him, plus master taking a picture of it happening.  But, that day of braking and going, of dodging cars coming at me, I was grateful that I have the jagoff driver partner I have to help condition me for the next time there is a school delay and I decide to drop off my kids.

Luckily I turn lemons into lemonade, and instead of having a catchy line about the jagoff school drop-off traffic jammers, I say I am grateful to have John teach me how to thrive, how to irritate back, how to capture the moment and complain.  So, here is to dealing with jagoff driving, thanks to John, ya jagoff!