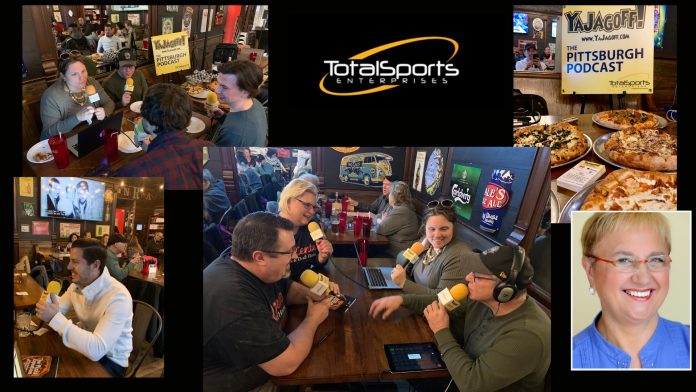 Summary: Nothing satisfies a jagoff appetite like pizza and beer. It is no surprise that the Jagoffs parked themselves in the middle of the new Caliente Pizza and Drafthouse in Monroeville. Owner, Nick Bogacz talked about the new location, his love for the Italian pie and we learned he is even an author! We also welcomed Justin Matase, Associate Publisher for the City Paper, just in time to talk about Taste 30. Chase and the Barons, Chase and Mike, stopped by to tell us about their new release that is causing much excitement for fans. Celebrity chef, author and restaurateur, Lidia Bastianich called in to give us a taste of what to expect at her 18th anniversary dinner next weekend.

Music: Chase and the Barons

Listen to the episode by pressing the play button below.

Don’t see the play play button above in your email? Click the one below to listen while you curse that groundhog meteorologist!

SPONSOR:  Total Sports Enterprises  is spring cleaning. Not only to give you the best deals around, but to prepare for our move next month. Prices are discounted and unique items are popping up everywhere. Stop by the Mall at Robinson for deals and steals, but be sure to visit TSE shop.com for all of your black and gold needs.

Question of the day: Caliente is used in Spanish and Italian cultures as a common word— what is your commonly used non-American word?

CONGRATULATIONS TO: Kayla Tranger for being our winner from the Facebook video. Your name was pulled in a raffle from all of the correct answers. Email us Rachael@YaJagoff.com Subject Line: PRIZE

04:12   Justin Matase: Pittsburgh City Paper Associate Publisher, Justin Matase, joins the YaJagoff  to discuss the delicious details for Taste30. Starting March 1-30, participating restaurants like The Vandal and Paris 66 will offer exclusive, curated three-course tastings for $30-$39 throughout the Pittsburgh area. It will feature the top chefs and must-visit restaurants for patrons to enjoy a delectable time of great company, flavor and fun!

15:14   Nick and Angela Bogacz: Proud Owners Nick and Angela of Caliente Pizza & Draft House discuss their beginning passions for the fine art of pizza making while opening their fifth, successful location in Monroeville, Pennsylvania. Not only is Nick a fine pizza chef, he is also a skilled writer in his new book, The Pizza Equation- Slicing Up How to Run a Successful Pizza Enterprise. Be sure to stop by their new Monroeville location while enjoying specialty pizzas where historical elegance and modern, rustic chic ambience fills the environment for happy guests. Did we mention they will be traveling to Parma, Italy for The World Pizza Championship? They certainly know how to put Pittsburgh on the map for pizza!

37:39  Lidia Bastianich:  We welcomed the renowned author, chef and after 18 years and counting at her Strip District restaurant, bonafide Pittsburgher, Lidia. She gets us salivating over what to expect on the anniversary dinner menu next Sunday, provides tips for making the perfect pasta, and reminisces what her location was like 18 years ago compared to now. Her go to Italian word?  Hint: she says it better than Rachael.

50:46   Chase and Mike: Chase and Mike from Chase and the Barons talk about their musical adventures as well as exciting, upcoming news for their fans. Keep those ears listening, because the band’s album Live Wire Bed Fire will be released on April 6th 2019. Listen to their creative ability in lyrical writing, music production and hard work as they continue to take the Pittsburgh region by popular storm. Don’t miss out on their album release show at Mr. Smalls Theatre on April 5th and stay up-to-date by looking at their schedule!

SPONSOR: Total Sports Enterprises  is spring cleaning. Not only to give you the best deals around, but to prepare for our move next month. Prices are discounted and unique items are popping up everywhere. Stop by the Mall at Robinson for deals and steals, but be sure to visit TSE shop.com for all of your black and gold needs

Thanks much to our friends at WORD WRITE for the hook-up!

Thanks To: Colin Parrish for social, video and photos.

Chase and the Barons: @Baron_Chaser

#YaJagoffPodcast / A ‘lil Tiki to end the Weeky

YaJagoff Podcast 68, Crafting at Hobby Prodigy With Baron Batch and...