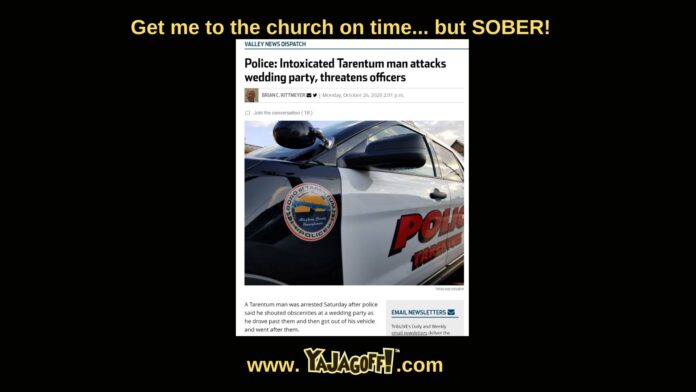 There are lots of wedding traditions… especially in Pittsburgh. From people that use to throw rice to dove releases, to doing the Hokey Pokey and, the The Electric Slide, to the dance where peeps give a dollar to dance with the bride to the Pittsburgh Cookie Table. Some might even say there’s a tradition of having a drunk uncle, maybe even named Stush, do something stupid at the reception.

Well, it looks like Brian Henning ALLEGEDLY tried to play the role of the drunk uncle.  For some reason he decided to ride around the block yelling slurs at the bridal party (see article in the Trib) as opposed to attending the reception, and checking Aunt Esther into a table during the Hokey Pokey.

Police say, “the group reported that Henning drove around the block several times, calling them profanity-laced names before stopping his vehicle in the street.

Police said Henning had no shoes on when he got out of his vehicle and came toward the group in an aggressive manner, trying to fight any person that stood in front of him. Members of the group held him down on the sidewalk until police arrived, according to the criminal complaint.”

Hey Big Bry.. if you don’t mind us being informal, we know that this is all alleged so, don’t worry about us being judgy. Not sure what your defense can be but, probs wouldn’t say anything like the bride scorned ya or the groom stool your lunch back in grade school. Why don’t ya say something like, it is YOUR family tradition to heckle the bride and groom and that they get 10 years of good luck for every circle you make around the block yelling swear words.  Not sure what else to do but, please make sure that, if you get some bail money, to put a few bucks in a card and send it over to the new couple… YaJagoff!