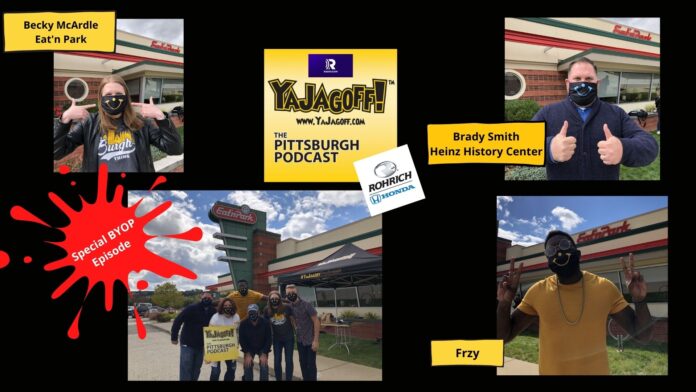 Summary:  The jagoffs get to celly #WorldSmileDay on the same day we celebrate the BYOP (Build Your Own Podcast) at the place for smiles. We welcome the winners that include Frzy as favorite Pittsburgh person, the cardigan, as in the Mr. Roger’s staple housed at the Heinz History Center, and the favorite place with all of the smiles, Eat’n Park.

Press the PLAY button to listen.

Don’t see the PLAY button above in your email? Click the pic below to listen while you work! 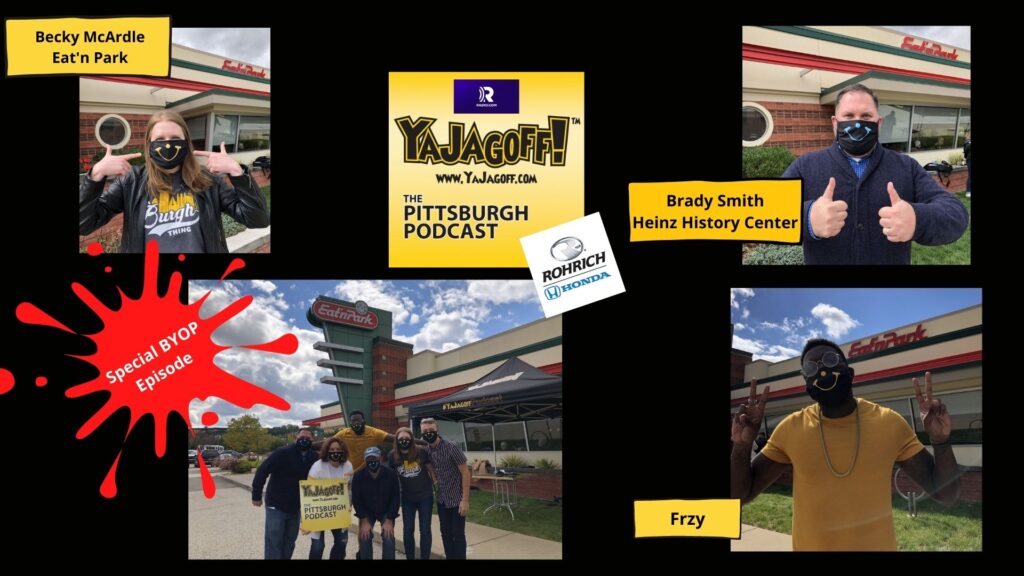 SPONSOR: We have certainly done our share of mentioning the deals and do’s at Rohrich Honda, but did you know you that with the purchase of any new or used vehicle you are getting the Rohrich Advantage? That means lifetime FREE oil changes, PA state inspections, car loaners and washes, plus a new car engine warranty. Need we say more? As always visit Rohrich.com for all of your vehicle needs.

The first Friday of October is World Smile Day (October 2).  Created by a commercial artist named Harvey Ball, this day came about as a response to his creation of the smiley face. Harvey worried that the commercialization of the symbol would lessen its impact. We can hardly blame him for his estimation; the symbol has been used in many different ways including clothing, comic books, coffee mugs, pins, and more. These little yellow faces are more than just a symbol, they’re a statement about the power of smiling.

The celebration aspects of the day were simple yet effective: people were to use the day to smile and make small acts of kindness worldwide. Harvey wanted to keep the smile connected to the human being. By doing so, you’d smile and in return, you’d make someone else smile and brighten up their day.

Question of the Day:  Bigger smile: breakfast or lunch? Christmas or birthday? Beach or blizzard?

6:23    Eat’n Park’s Becky McCardle: Manager of Communications at Eat’n Park and BYOP winner Becky McCardle jumps on the podcast to discuss the Eat’n Park nostalgia that almost every Pittsburgher can relate to, the history of the smiley cookie, and the Christmas tree star commercial that will be making you smile ear to ear.

17:15    Heinz History Center’s Brady Smith: Brady from the Heinz History Center reppin’ his own take on the Mr. Roger’s cardigan was the most Pittsburgh thing for the BYOP. On World Smile day, he talks a little of the Mr. Rogers exhibit and how it’s making everyone grin widely and light up those hearts. And which exhibit does Brady sneak into in the off hours?

34:35    Frzy: Emmy award-winning rapper and lyrical genius Frzy swings back onto the podcast to offer some freestyle rap that will make any listener smile till it hurts. In the BYOP voting, he beat out all of the other Pittsburgh personalities including Hines Ward for this episode! Freestyling about smiling, black and yellow, comic books, Harvey, the Burgh, cookies and more. And then he turns his questions on to John and Rachael.