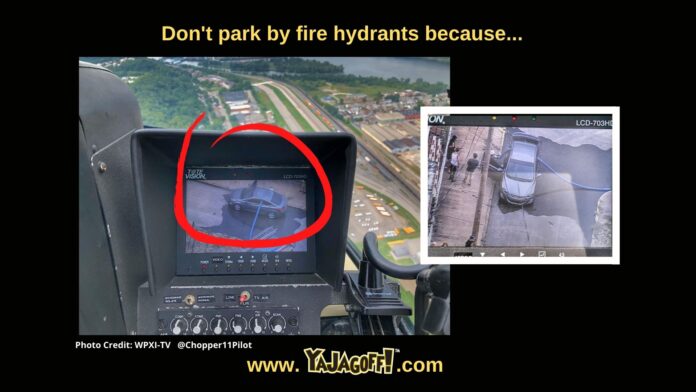 You know how when you were in school and someone fell down the steps or walked into the open door of a locker, you waited a quick second to make sure they were not maimed  before you laughed? This is kinda like that.

Everyone knows that you don’t block a fire hydrant when you park. The chances of their actually being a fire are so slim but, ya just never know.

Well, this car blocked a hydrant at a fire in McKees Rocks yesterday afternoon and the car  got the old break-out-the-windas-and-run-the-hose-through-the-car treatment.

No doubt a jagoff move… but… there’s a twist.  Suppose-ABLY (the Pittsburghese version of the word supposedly) the driver of the car pulled up to the burning building to check on an elderly relative who lived in that same building.  Sooooo there’s that ’cause, if that’s so, surely the driver was in a bit of a panic. Social media says all are safe THANKFULLY so.. now we can poke fun, right?

Either way, a tough lesson learned but, generally, cars blocking fire hydrants so that the driver can “run into _______ for just a coupla minutes” is a frequent occurrence and it makes the life of firefighters difficult.

Credit to @Chopper11Pilot for the pic… Good eye from the sky!