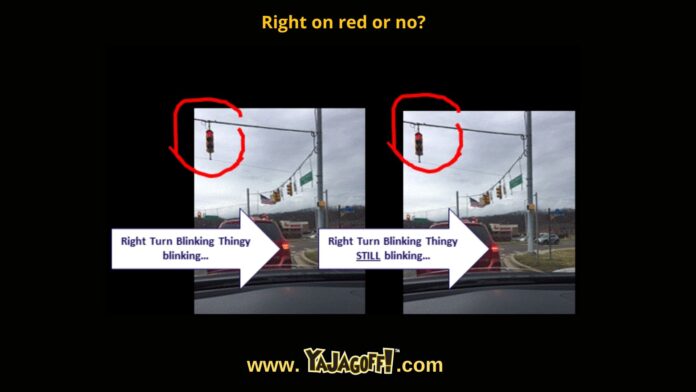 Hey… it’s not EVERY day that you get someone to use their turn signal.  It’s rare because usually drivers are too busy smoking, texting, changing their Pandora station, swiping tinder and watching funny Facebook videos while they are trying to pick their nose.  That can get a little complicated with only 2 hands so the turn signal thingy just doesn’t get on the priority list.

But… this person DID use it.  They used it appropriately to let me know that they were doing to turn right into the VORTEX OF HELL that is known as the Sam’s Club in Robinson Township on a Saturday morning right after that announced they had cases of Lysol wipes.

Seriously, the lead car, or pole, position is the most important position at a nightmare traffic intersection like this one. Ya gotta stay aware and get ahead of the others!  Sometimes it is the difference between walking swiftly passed the Sam’s Club I.D. card verification-er or getting stuck behind 5 people digging through their wallet to find the stupid card despite the fact that they KNEW they were going there to shop.

Ya used your turn signal.. you’re half way there..stop picking your nose and turn right on red….Ya Jagoff!

BTW.. I tweeted this question the other day. If you’re behind this person, do you beep at them or no?