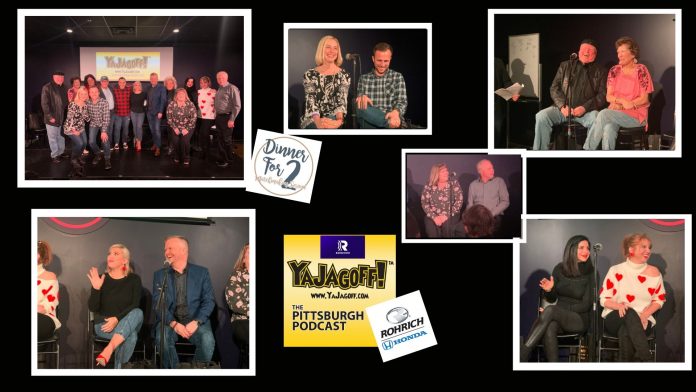 Summary: The Jagoff game show part deux went down and where better than the Arcade Theater yet again?  New year and new spin included playing for charities with three Pittsburgh celeb duos.  We welcomed PTL’s Heather Abraham and David Highfield, Natalie Bencivenga and Sara Bauknecht of the Post-Gazette, and Johnny Angel and wife Mary Lou along with some audience surprise interactions.

Episode Music: Everyone broke out into a Rick Astley song at some point, so, that’s the music for this episode!

Listen to the podcast by pressing the PLAY button below.

Don’t see the PLAY button above in your email? Click on the one below to listen.

SPONSOR: Rohrich Honda resides in Bloomfield and wants to get to know its neighborhood, and have the neighborhood know them.  So, look for the medallion Honda H on neighborhood landmarks like the Bloomfield sign, Tessaro’s and even in other neighborhoods like North Shore’s PNC Park.  Visit your neighborhood Honda dealer on Liberty Avenue where hundreds of models are in stock.  As always visit rohrich.com

What was on the blog?

PICKLESBURGH NEEDS YOUR HELP TO DEFEND ITS TITLE AS #1 IN THE U.S.A.

Where can you find us next?

SPECIAL THANKS TO DINNER FOR 2—A PREMIER MATCHMAKING SERVICE IN PA IS SPONSORING AND UPPING THE ANTE BY ADDING $100 TO EVERY CHARITY! IT IS THE PERFECT WAY TO PAIR INDIVIDUALS WHO DON’T WANT ALGARYTHMS OR BARS—NAN IS THE OLD–FASHIONED MATCHMAKER.

David Highfield and Heather Abraham: Pittsburgh Today Live’s power duo had their game faces on… until one of the two rely on a made-up-word as an answer. David’s lip syncing is average, but strategies eventually come into play while they shed a light for the KDKA-TV Turkey Fund and expand on avocado toast as a party pleaser (but really, cosmos).

Natalie Bencivenga and Sara Bauknecht: Pittsburgh Post-Gazette gals set the seen on stage for a friendly competition, with fun and flare, all in the support of SisterFriend. Listen as the PG girls just want to have fun, read hot gossip, and bring chicken (just chicken?) to liven up a party with the Backstreet Boys bumpin’!

Jack Hunt “Johnny Angel” and Mary Lou Hunt: Long-lasting lovebirds, Johnny Angel and Mary Lou head to the stage in support of the Community Liver Alliance and learn new things along the way like vacay–packing strategies, Cher re-enactments and daydreams of hitting the jack pot with a hot tub in Naples, Florida. Hear from the experts of love as they bring charm and wit as their best defense to conquering all in the name of love for liver disease support.

Kathleen and Kyle Conway: The cutest YaJagoff fan couple award goes to… the Conways! Kathleen and Kyle surprise the audience by jumping on stage to test their relationship with who needs a Peloton bike more and who can’t stand the madness of scratching. Either way, the two fit perfectly on stage to deliver some laughable moments!

Dave and Sue Roscoe: Surprise!- Another audience couple joins the stage with chuckles and cackles to answer Rach and John questions (which one’s are better?) that may just have them more confused in really knowing each other. Dave and Sue may not be here to win points, but they are here for a good time!

What irritates your partner about you?

What would your partner buy if they won the lottery?

What band or musician is a “must see” for your partner?

What would be your partner’s “go-to” party item (to take to a party)?

SPONSOR: Rohrich Honda resides in Bloomfield and wants to get to know its neighborhood, and have the neighborhood know them.  So, look for the medallion Honda H on neighborhood landmarks like the Bloomfield sign, Tessaro’s and even in other neighborhoods like North Shore’s PNC Park.  Visit your neighborhood Honda dealer on Liberty Avenue where hundreds of models are in stock.  As always visit rohrich.com

A Triple Dip of Ohio Drivers on a Training Mission (YIKES)

Oil and Chip The Roads! WHY???