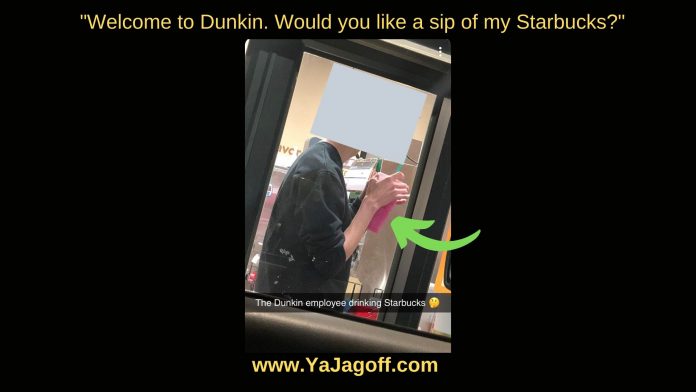 Something indeed.  Sometimes though, it can be a little over the top. Like the chic in all the “flair” at the local watering hole donning pins and buttons identifying the company for decades. How about the person who wears the Statue of Liberty costume and whimsically waves to every passerby…now that is a team player to the max.  Kudos company peeps.  Because some of us just like what we like, company longevity and spirit, blah, blah, blah. It is what it is.

So, McDonald’s worker, if you like a BK Broiler…enjoy.  Coke worke, you prefer a Pepsi One…have at it.  But, at the workplace?  YIKES!  Maybe be a little more discreet? I mean Dunkin’ Donuts may be known for donuts, but coffee is a close second, whereas Starbucks is the coffee KING with not much as a close second.  And even that guy who grabs a chocolate milk in lieu of coffee because he has not acquired the taste for even a frappe dolce deluxe (or whatever) knows the logo and color and style of Starbucks.  It is as plain as the DD on Dunkin’ Donuts.

So, next time the double D worker craves a Seattle staple, maybe put it in a different cup?  Or wait until someone isn’t at the drive through to start sipping?  I mean I get it, not your drink.  But just wait til the time is right to sip on the competitors drink, ya jagoff!