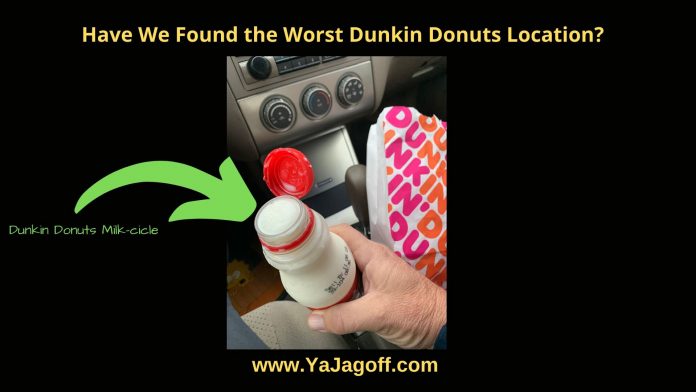 Pretty sure that, when your name is Dunkin’ Donuts, people expect you to have DONUTS! Annnnd… if you run out of donuts, especially in the morning when peeps are on their way to work or whatever…you would have more on hand shortly.

Well, you would think that.. unless you’re trying to get a donut at the worst Dunkin’ Donut shop this side of Saturn. Not sure what happens at the West View Plaza Dunkin drive thru.

I always ask for a chocolate milk. 50% of the time they have a white milk waiting for me at the pick-up winda.

50% of the time (unscientific research and not adjusted for my negative emotions) they are out of the good donuts (cake) by 8am. And never seem to be making more any time soon.

On this day, we ordered a mocha-caramel-lotta-crappa coffee thing, an egg and cheese wrap, a white milk and a chocolate cake donut.

When we got to the drive-up winda, they had given us the wrong kind of egg wrap, said they were out of chocolate cake donuts (8am-ish) were confused over the coffee and voila.. had the white milk.  After a polite discussion about the donut shop not having enough donuts at the peak hours, we drove off with the correct mocha-thingy, the white milk, no offer to refund us for the donut they didn’t have, and the correct (after exchange) egg wrap.

Fast forward to the next stop light… while Rachael was enjoying her mocha-carmel-lotta-crappa coffee thing and egg and cheese wrap… I opened the milk to calm my morning hunger pangs.

It was basically an iceberg in a bottle.. except for the milk-water that splattered all over my pants and the car console when I twisted off the cap.

Dunkin peeps…not to be presumptuous but a plethora of pastries would probably please the public particularly since you proclaim in your promos to sell DONUTS. And can ya please take the milk outta the freezer … YaJagoffs?