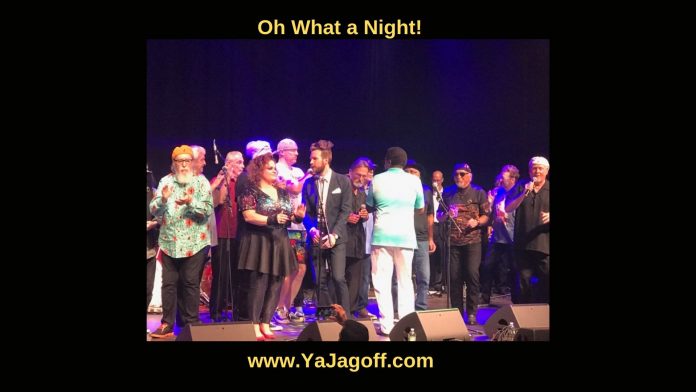 People all over the world join hands and start a love train. The O’Jays signature celebratory song ‘Love Train’ was the finale song heard throughout McKee Rocks as a close to the #UltimateLiverFunction.  Musicians of all different styles and genres crowded onto the Roxian Theatre stage to celebrate the completion of a powerful show that would mark a night NO ONE could forget.  And if you looked at the packed dance floor, you saw Marylou Hunt, liver recipient, among them.

The thank you’s are endless from people who prayed for Marylou and her donor Sara, and attended to show support, to UPMC Transplant Services who presented the event.  But the gratitude is also for Media Quest for technical support, the Community Liver Alliance for the partnership, Love Rocks Café for the food, Hollowood for the use of the gear to present the outside bands like Jess Klein, Sto Rox Band, Byron Nash, Larga Veda and Tom Kurlander Music.

Special thanks to long-time friends Warren Associates for the signage and printing and to Flyspace Productions who provided a state-of-the-art stage in the 11th hour of the event.  To Entercom and Amy Mauk for the added mentions and radio love, as well as Bubba and Melanie, Kelly from Star and Larry Ritchert and John Shumway.  Our extended family at PTL and Pittsburgh City Paper, as well as the Insider thanks to Bobby Cherry.  The coverage in the Beaver County Times thanks to Scott Tady and Natalie Bencivenga for today’s Seen coverage.

But the bands with sounds from rock and soul to an island feel and 80’s pop put the “ultimate” into the #UltimateLiverFunction. Not only did they all sound amazing, they dealt with sound check changes, equipment accommodations, sharing the stage with musicians they didn’t know, and all as volunteers to the cause! The Bloomfield Boyz kicked off the event with old school doo wop and led to J Roger Davis and his soothing ballads.  Twin Frames took the stage with an indie pop sound that gave way to soulful and sultry Byron Nash.  The Caribbean vibe was felt thanks to Barrels to Beethoven, who showcased their family talents to ‘Hey Jude,’ which may be one of Dave Molter Band’s faves.  After DMB completed their rock set, Tim Vitullo Band possessed the crowd with his pop rock vibe and thn Totally 80’s demanded that all get Footloose.  Trust me, the audience did.

Johnny Angel and the Halos took the stage and jammed with the Marcels, Kenny Mitchell, Pete Hewlett and Crystal Blue Band, all effortlessly and eloquently. Powerhouse Eddie Holman closed the show as he belted ‘Hey There Lonely girl,’ ‘Let’s Stay Together,’ and ‘This Can’t Be True Girl.’   But when all of these musicians took the stage together, it was magic.  Music worlds collided to celebrate and close the over 8-hour event that will forever be known as the ultimate night, ultimate memory, and ultimate gesture for so many good reasons. Thank you for making this the #UltimateFunction.