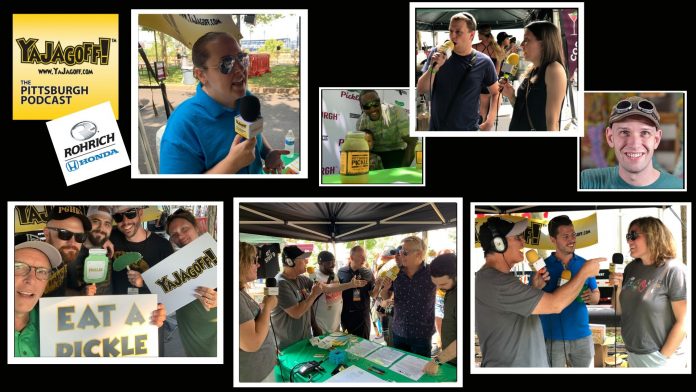 Summary: There is no bigger dill. Picklesburgh is the bread and butter of summer and the jagoffs hosted, emceed and camped out in the new jagoff tent for three days. From pickled pastries to a giant pickle on a stick, the duo was juiced to be part of the biggest dill in the ‘burgh. You will be green with envy if you miss this episode! The jagoffs have gone rogue to celebrate Picklesburgh with no intro or talk about what was on the blog.

Press the PLAY Button below to listen.

Don’t see the PLAY Button above in your email, click on the one below to listen.

SPONSOR:  Rohrich Honda….Larry from Rohrich hints at its history and informs us of the advantages to utilizing the Rohrich family of vehicles.

Question of the day: Is it a dill spear or a bread and butter chip that strikes your pickle fancy?

01:22 Joel, John and Will of the Pittsburgh Pickle Company: The brothers discuss their five-year run of pickling and the festival that created a Pittsburgh phenom. Not much sibling rivalry since they surround themselves with sweet and salty splendor every day, accompanied by beer.  Hear what their newest product is just released at Picklesburgh.

07:50 Justin Matase, Pittsburgh City Paper: The GSM talks about the bigger and better Best Of event happening at Nova Place, where Pittsburgh’s best will be crowned at the circus-themed celebration, thanks to the surplus of votes this year.  Purchase a ticket to the City Paper Best of event on August 8th at a discount. Use the code YaJagoff during checkout to get $10 off your ticket.

21:56  Arthur Moats, Moats’ Notes sponsored by J & D Waterpoofing and Remodeling. What “pickle situations” has Arthur been in? And, what was his drink of choice on the way to work?

27:19 Jeremy and Angie, DiscoverTheBurgh.com: Discovering all things Pittsburgh from caves in the Laurel Highlands to tasting a new brew from one of the many breweries popping up, this duo has set out to explore all of the undiscovered gems of Pittsburgh to not only be discovered, but discussed…and the Ya Jagoff podcast has some of the summer’s must do activities!

39:20 Pardon the Interruptions: Stefan, CMU, is a podcast instructor from the UK on an American Adventure.  He is about to teach his students about podcasting!

42:12 Foo Conner, Jekko.com: Nothing betters Picklesburgh like the guest arrival of Foo.  He tells us about the increase in visitors at RandyLand, including the striking similarities in Mister Rogers Neighborhood to the Randy empire.  Plus, Foo tells us about the 600 plus events he attends as a man on the move, which includes some underground rap parties!

52:21 Pardon the Interruptions: Pickle Salutations from Whitehall, former Pittsburghers from the South

53:35  Peter Katz, Exec VP, Red Power Ranger, Jason Faunt, Kato Kaelin, and a cast of cosworld visitors from Wizard World: It was a cosplay kinda day at Picklesburgh when the different personalities of the make-believe world took a break from their interactive family show to drink some pickle juice and crunch on some pickles.

39:29 Pardon the Interruptions: Pickle Salutations from Pittsburgh, including a couple who have something to say to Ohio drivers and some pickled pretzel talk

1:10 Pardon the Interruptions: Pickle Salutations from Plumb including a yinz/younz correction,Sheffiled, PA,

1:11 Joe George, Mayor of Picklesburgh! Initials J. A. G. and winner of the Title Belt tells us how victory x2 feels and why it is easy for him to chug the juice!

1:16 Pardon the Interruptions: One final Pickle Salutation from Hilga, a transplanted New Yorker, via Seattle to Pittsburgh, brand new grandmother!

SPONSOR:  Rohrich Honda….Larry from Rohrich hints at its history and informs us of the advantages to utilizing the Rohrich family of vehicles.

#YaJagoffPodcast/Some Laughter, Some Liquor and A Central Perk