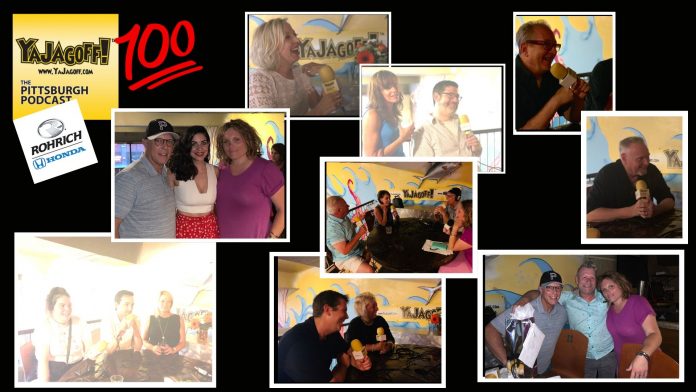 Summary: Through the hysterical chaos and touching moments, Rachael achieves her milestone in jagoff history of reaching her 100th YaJagoff Podcast episode at Luke Wholey’s Wild Alaskan Grille. Pittsburgh icons and loveable friends & family gather to celebrate Rachael for her lasting “really good questions.”  As many have said, congrats to this adorned achievement, and cheers to 100 more!

Press the PLAY button below to listen.

Don’t see the PLAY button above in your email? Click the one below so that you can listen while you sweat in this humidity!

Music: We substituted salutations to Rachael for this week’s music!

SPONSOR: Rohrich Honda has gotten acclimated to their Bloomfield community with visits to different businesses. The Jagoffs, and sales manager Larry, test drive different Hondas and learn the reason behind the Rohrich advantage.  Plus, with elite customer service and a dedicated repair team, we learn time after time the reason for their longevity in Pittsburgh. Find out which is your favorite Honda and remember the folks at Rohrich Honda when you are ready for a new ride. Visit www.rohrich.com and experience the difference.

Question of the day: Listen as questions blast back and forth between Rachael and her fave guests!

02:03  Luke Wholey, Wholey’s Alaskan Grille: Luke is our host. 80% of crabs caught in Alaska gets sold where??? And other crab leg eating secrets including the meat-to-shell ratio.  Who knew? Luke!

8:09  Scot MacTaggart, Pitchwerks Podcast Host: Why does Scot want to interview Mayor Bill Peduto? And then he makes Rachael swear with HIS question for her!

17:14  Natalie Bencivenga, Post-Gazette Seen Columnist: Natalie recognized what Rachael has brought to the podcast and what podcasting has done for her as far as meeting so many people. Her poise and skill always prevails.

25:49  Paul Alexander & Shelley Duffy: Just married and ready to roll PLUS Shelley rolls a serious lint brush! You know Paul, he tells all!

38:26  The YaJagoff Media Team, Colin, Emily and Michele: Colin votes for wine at the Wednesday 9am meetings and Michele declares no post-holiday meetings.

44:58 Russell Howard, Pittsburgh Downtown Partnership:  Russel is terrified of Rachael??? But his question for Rachael is the best of the podcast. This story is the coveted Rennebeck reality.

52:01  Rachael’s Dad, “Johnny Angel” : He just might get the Steve Martin on Saturday Night Live Award for most appearances on the YaJagoff Podcast!

58:05  Amanda McKendree, Progressive Supranuclear Palsy:  Amanda headed one of the first groups in Pennsylvania to focus on raising money for PSP support, treatment and research in honor of her father.  Go to the Pirate game August, 4th to support PSP. Ticket info StrikeOutPSP.com .

1:10 Robert Miles, Pittsburgh Concierge: Robert has been a friend of the podcast and recognizes who puts up with WHO!!!

Summary of Guests: Due to the calamity of popularity to Rachael’s roundup, the sound off of guests jumping on the podcast vary at different times and are highlighted here: Natalie Bencivenga, Shelley Duffy and Paul Alexander, Robert Miles, Russell Howard, Michelle Shrader, Emily Lantzy, Amanda & Daniel Casciato, Scot MacTaggart, Larry Mercurio, Luke Wholey, Nan Cohen, and many more! Guests reminisce of the best memories of Rachael with prominent affiliations to the Pittsburgh Downtown Partnership, The Post-Gazette as well as fellow podcasts like Pitchwerks. Other discussions include flare and flavor of Luke Wholey’s Pittsburgh, and chatting up Strikeout PSP and Cure PSP, Inc. Listen as conversations collaborate, laughter ensues, and chatter commences to congratulate Rachael on her journey to 100 episodes!

#YaJagoff Podcast / The Episode that Goes Deep at the Kelly...