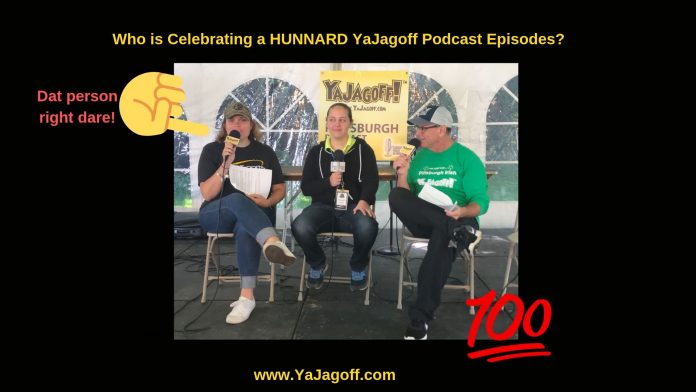 Who is celebratin’ a hunnard? Why Rachael Rennebeck is… as co-host of the YaJagoff Podcast.. 100 episodes! (Party info at the end of this blog post)

The episodes started at the Pittsburgh Irish Festival, 2017 (photo above).

A podcast is an easy thing to do, it is not. There are a lot of planning and logistics that go into it.  So I thought I would list how much goes into co-hosting a HUNNARD YaJagoff Podcast episodes!

Rachael prepared, typed, and printed 100 set of show notes so that we looked professional and organized once we started recording each episode

Almost 100 times she called, texted, emailed people to be guests, musicians, on the podcast.. while she was cooking, driving or watching a hockey game or CLO

100 times (almost) she was ALMOST ready at that time but had to do “one more thing first.”

Nearly 100 times she has had to correct me on how I read the sponsor ad, AT LEAST once, because I am a terrible reader on the fly

100 times she created, or at least proof read, the episode show notes before they were posted with the podcast so that we looked professional

Most importantly, 100 times she co-hosted the podcast professionally and compassionately, like as if she was born to do this, despite whatever guests cancelled, whatever weather occurred, or whatever crazy conditions we might have been operating under and nearly 100 of those times was out of pure heart and dedication vs. getting paid to be doing it so that we could move this podcast to the next level!

Thanks Rach for seeing the vision. Thanks Will, Roman, Dom, Addie and Tanner for putting up with it.

NOTE: We are celebrating Rachael’s 100th YaJagoff Podcast episode at Luke Wholey’s Alaskan Grille in the Strip District on Saturday, July 6th from 6-9pm. Come hang out and, for every order of Luke’s Crab Dip, $3 will go to the Community Liver Alliance .This is a casual event. A podcast recording will occur before the party starts.

–> No purchase required but please let us know if you can make it so that we know how much space to reserve.