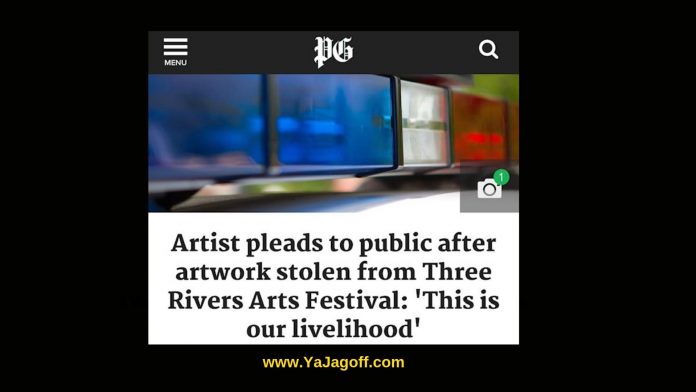 This weekend was the very first weekend of the 60th anniversary of the Dollar Bank Three Rivers Arts Festival, TRAF for the hip, dope, SWOLE crowd. And it was spoiled by Jagoffs who wanted some free stuff.

Under the cover of darkness, unknown thieves took coasters from Pittsburgh’s Dave DiCello, large paintings and.. to top it off, a painting, on wood, of Mr. Rogers! Who in the world, or in the neighborhood, has the guts to steal a Mr. Rogers anything? Isn’t that like stomping on a Terrible Towel?

And even more, how do these night-art-raid thoughts begin?
“Ya know what would make us a bunch of money fast?” And then they down a few more “bravery beers” and go to it!  But…. they forget to plan what the next step might be…. like… “Where do we hide or sell stuff that has been mentioned all over the news?”

Art thieves..thanks for spoiling the artist party on the first weekend. Don’t you know the annual tradition? It’s the rain’s job to spoil TRAF, not yours YaJagoffs!