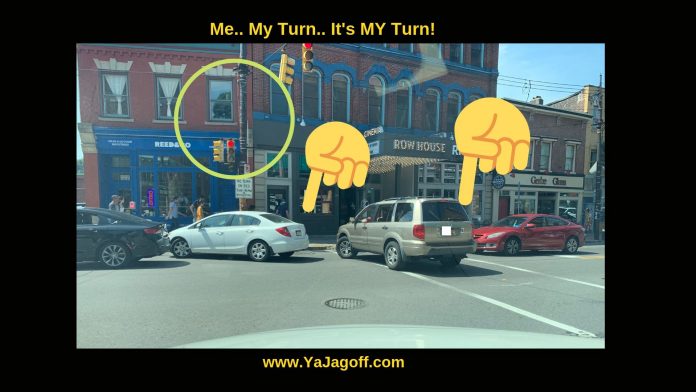 The traffic around Pittsburgh can get frustrating.  The traffic around Pittsburgh with nearly ever major roadway AND their detours under construction can be I-can’t-find-a-power-outlet-for-my-smart-phone-and-puppies-might-die level of frustrating. When other drivers don’t know the difference between red, yellow and green lights, all of that traffic frustration can take your blood pressure to I-ate-3,561-high-sodium-pretzels-and-drank-421-cases-of-beers-last-night level.

This intersection in Lawrenceville at Butler Street, otherwise known as the intersection of Hades and The Hell of the Steelers Having a Losing Season 15 Consecutive Years, took  Jafoffery to another level .

Here’s my thought on each of them, ( i.e, made up excuse so that I don’t have to admit that they are complete ignoramuses) their GPS units said, “Continue on Route Butler Street..”  So they did.. the GPS didn’t say nuthin’ about stopping at no red lights and being courteous to others that are coming from the other side of the intersection.

Hey you 3 traffic stooges, if by chance you are going to continue to listen to that GPS thing and NOT look out your windshield at the traffic lights every once in a while, you’re stuffing yourself into the intersection where there’s no room.. just like your aunt that used to come to the summer picnics stuffing her 5, size-9 toes into pantyhose and a size-5 toe-less shoes! There ain’t no room for you…YaJagoff!