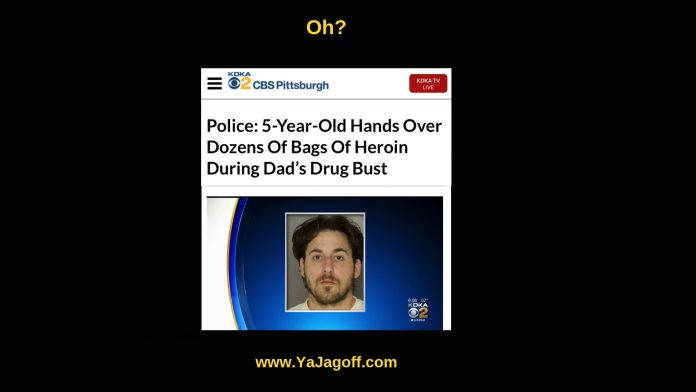 “Dad being an expert at packing the car,” better than anyone else, has been a joke since long before Chevy Chase started in the movie Vacation but, this one is a little different.

You can see the full story on KDKA-TV here but this is the summary:

Dad gets pulled over by the Po-Po for a bad license plate light.

The dad allegedly admitted that he had just come from a North Side heroin run.. not sure if he got Fuel Perks on those or not. Dad handed over some bags of heroin.. kinda like when ya hand over the chocolate bar, to your mom, when you get caught sneaking one.

When the Po-Po asked if there was any more heroin in the car, suppSABLY dad’s daughter, sitting in a car seat, handed over 20 more bags of heroin that had been allegedly packed in her car seat.

When the Po-Po asked if there was any more heroin in the car, suppSABLY dad’s daughter, sitting in a car seat, handed over 10 more bags of heroin that had been allegedly packed in her car seat. (NO, this paragraph wasn’t a mistake. This happened twice!

Hey dad.. guessing that your daddy/daughter day out has a few more memories than dad might have planned! The chance for a selfie went more to a booking photo!

Eric.. thank GAWD you proved that you have the basic “dad gene” to pack a car to the hilt. The problem is, you’re s’posed to be packing the car full of boogie-boards, water wings, chase lounges, suntan lotion, coolers of beer, sandals, beach towels and innertubes for the beach and not HEROIN… YaJagoff!

NOTE: Yes.. we know that heroin addiction is not joke. But this dad, IS!

Beers… Who Got Beers? Oh… The Police Do!