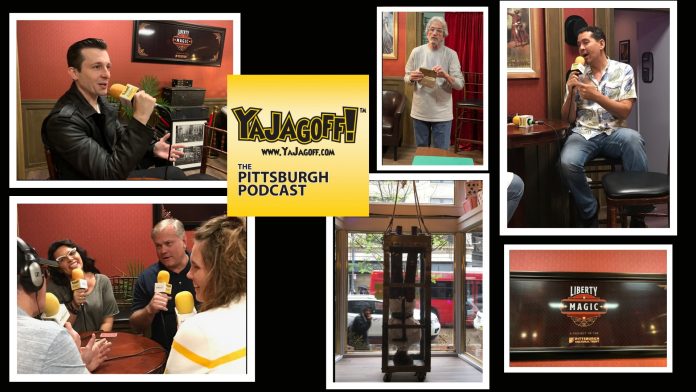 Summary:   The jagoff duo took Uncle Joey to Liberty Magic where the game Clue-like atmosphere set the scene for a “how’d that happen’ kinda podcast. Lee Terbosic talked about his Houdini connection and the importance of staying in Pittsburgh to make magic, and Venue Manager and Host, Graham Fandrei, a Belize-native, beamed with pride since Pittsburgh is one-in-a-million as a magic hub hosted by the Cultural Trust.  Pittsburgh Business Show creators Bryan and Linda Jo Thornberg talked about making magic for business networking with their third year of presenting the business show with a women’s expo addition this year.

If you don’t see the PLAY button above, in your email, click the one below to listen while you ponder the Penguins and Pirates.

Music: You Are My Sunshine (ML’s fav family song)

Question of the day: We are talking making magic happen, if you could make one thing disappear what would it be?

00:48 Intro with John and Rachael about Liberty Magic at one time being the Arcade Comedy Theater and the building known for sell-out crowds.

02:19  Lee Terbosic reminds us of his preparation for Houdini 100 and how it paved the way to the Discovery Channel’s interest in four episodes of an upcoming series.  Plus, what would he want to make disappear outside of a planned show?

30:11 Linda Jo and Bryan Thornberg are used to having their hands in multiple projects, and the Pittsburgh Business Show is one of the most successful.  Vendors from all over the city and beyond have a chance to network and educate others about their business model.  A speed networking event, multiple speakers, podcast pod and more will take this year to a whole new level.  Plus use the word Ya Jagoff and get a special ticket price.

43:07 Graham Fandrei is the first guy you see at Liberty Magic, and warms up the crowd at each show with anecdotes and some magic of his own.  His opera-trained voice lures you to stay and maybe take in the VIP portion of the entertainment-packed evening.

Thanks To: Uncle Joe for social, video and photos.

#YaJagoffPodcast/Touching Base with New Endeavors