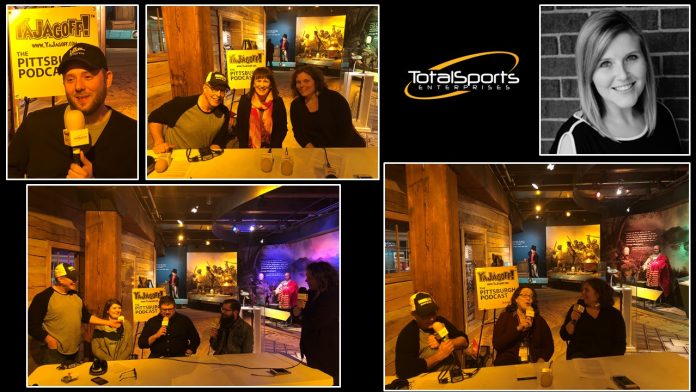 Summary:  The all-star cast of Hamilton sparked the YaJagoff podcast pool of talent for the all things Hamilton episode at the Heinz History Center.  They welcomed Director of Communications for the Cultural Trust, Robin Elrod to discuss the intensity to hosting such a production. Plus, Heinz History Center Curator Leslie Przybylek weighs in on the History Center’s part in the legendary production, and cousin Marilyn Walsh, Marketing Director of Baptist Homes Society talks about the new resident building, Hamilton Tower at Providence Point. James J. Hamilton has a fancy name for our resident comedic, funny guy, and nothing like a whiskey-relevant band like The Whelming Waters to complete our historic hop in time.

Press the PLAY button below to listen to the podcast now.

Don’t see the PLAY button in your email? Click the one below to listen to the podcast while you take down your holiday decorations or work!

Music:  The Whelming Waters: Collin and his sister Kelcie Lindenberg formed in the winter of 2015 and are a Pittsburgh-based band with wide-ranging musical styles.

SPONSOR:  Total Sports Enterprises knows their fans like deals and when better to get the best deals than after the holidays? Head to TSE at the Mall at Robinson for everything from signed and unsigned athlete pics to Polamaulu puzzles and sales on your fave pucks. Still don’t want to hit the mall? Visit tseshop.com and browse anytime for any and all of your black and gold needs.

Question of the day: Since it’s the 6 degrees of Kevin Bacon scenario with Hamilton, who are you 6 degree or cousin twice removed related to or know who is a celeb or royalty?

15: 35 Robin Elrod: Who knows where Robin is as she takes time to call in to the podcast. Is she sleeping at the Benedum? Did we catch her on set? Hamilton, the musical, is a boon for Pittsburgh theater goers and the Cultural Trust!

25: 52 Marilyn Walsh: Marketing Director of Baptist Homes Society, Marliyn Walsh joins the podcast to discuss her intertwined role of Providence Point’s excitement of the new living accommodations of the Hamilton Tower. She provides insight to the naming of the building as well as geographical history of the land at Providence Point. Listen closely to upcoming events that may involve a curated whiskey cocktail that will be sure to start a rebellion… or at least good time!

37: 24 James J Hamilton: Pittsburgh Comedian James J. Hamilton discusses his inspiration for his stage name in comedy and pitches some jokes to our fellow jagoffs that will be sure to catch your attention. He may seem reserved and shy, but he does not hold back on his comedic creativity. He has performed at the DVE Comedy Festival, Burning Bridges Festival, Pittsburgh Improv and Arcade Comedy Theater. Though he admits he made $11 at one of his most recent shows, listeners can find out where he will be performing next.

47: 45 The Whelming Waters: Pittsburgh based rock and roll band, The Whelming Waters jams out on the podcast, playing one of its hit songs, “Whiskey Song.” The band consists of a brother and sister as well as the sister’s husband. They reveal the significance of their band name, family dynamics and celebrity run-ins. This compelling trio will be sure to perk ears in awe of their rustic music abilities. Find the Whelming Waters for bookings and online schedule.

SPONSOR: Total Sports Enterprises knows their fans like deals and when better to get the best deals than after the holidays?  Head to TSE at the Mall at Robinson for everything from signed and unsigned athlete pics to Polamaulu puzzles and sales on your fave pucks. Still don’t want to hit the mall?  Visit tseshop.com and browse anytime for any and all of your black and gold needs.

Thanks To: Colin Parrish for the photos and video.

#YaJagoffPodcast/Touching Base with New Endeavors

How Was “Hamilton,” You Ask?

The Trash Can is WHERE?