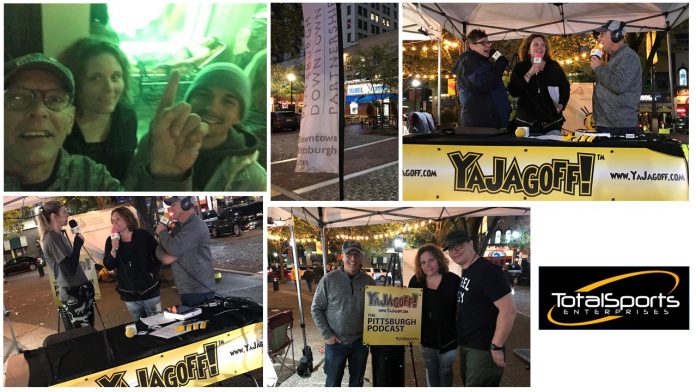 Summary: The jagoffs help prepare for the PDP Market Square Night Markets’ end with a scare tactic.  Thanks to PDP Vice President of Marketing and Communications, Leigh White Koenig, ScareHouse Director of Marketing Kate Dudas, and Brian Laing, Bar Manager at The Oyster House, we pulled some deets out about Fright Up Night, the new retail home store opening near downtown, and the Holiday Market.  Plus we take time to discuss live zombie wrestling, as well as the upcoming zombie presence in Market Square at the Zombie Den (The Original Oyster House) which will have everyone doubling down on scary staring!

Listen to the podcast by pressing the play button on the player bar below.

If you don’t see the player bar above, in your email, click the one below to go listen while you drink your pumpkin spice thingy.

Music:  Music from the Night of the Living Dead Soundtrack (Part of the movie was edited on the 2nd floor of The Original Oyster House)

SPONSOR:  As you already know, Total Sports Enterprises will be at each Steeler Black and Gold Zone Tailgate party at Rivers Casino with our partners 937 the FAN.  The next public signing is a little taste of Steeler History with Jack Lambert, Donnie Shell, Mike Wagner, JT Thomas and Mel Blount.  The signings will be at the TSE store at the Mall at Robinson. Get your details and pre-sale items on tseshop.com where every day is game day.

Question of the day: Have you ever eaten anything inside of a grocery store other than free samples? A second option was to tell a good homecoming dance story.

04:35   Leigh White: Listen to Leigh! That should be her hashtag! #ListenToLeigh because the Pittsburgh Downtown Partnership has going on between now and the end of the year.

October 27th has 12 different party locations, 5-10pm, on one terrifying night for Fright Night 2!  This will include a live zombie wrestling match, in a real wrestling ring, right in Market Square!

And don’t forget about the People’s Gas Holiday Market that starts November 17th!

And then.. oh wait! Leigh will be right back after our next guest.

15:47   Katie Dudas: Scarehouse Pittsburgh, zombie-sitter, care-taker of the undead has details about the zombie wrestling match on October 27th. VIP tickets are available!!

Have you ever seen one zombie put another into a Full Nelson? Hopefully no one will lose their head during the craziest undead wrestling you can imagine. With two back-to-back matches at the top of every hour, patrons can root for their favorite blood-thirsty brain-eaters as they face off. Presented in partnership with RYSE Wrestling.

29:22   Leigh White: Leigh is back! You need handmade, homemade, Western-PA-made things like furniture and other household items?  PDP has the answer!  The PG&H store!  Opening on Wednesday, PG&H is welcoming Pittsburghers to a new shopping experience in the heart of Downtown Pittsburgh. The new retail showroom features a rotating inventory of high quality, beautiful homegoods, produced by regional makers. Located at 536 Smithfield Street, below Mellon Square Park, PG&H will be a welcome addition, bringing fresh retail to a long-vacant spot. Details on ShopPGandH.com.

43:25   Brian Laing: Did you know that The Oyster House had a REAL Night of the Living Dead movie secret? ScareHouse has teamed up with The Original Oyster House, the PDP and veteran food and beverage experts Michael McCoy and Brian to open the Zombie Den: Bar of the Living Dead!  It will be open from now until November 4th! Details here.

SPONSOR:  As you already know, Total Sports Enterprises will be at each Steeler Black and Gold Zone Tailgate parties at Rivers Casino with our partners the 937 FAN.  The next public signing is a little taste of Steeler History with Jack Lambert, Donnie Shell, Mike Wagner, JT Thomas and Mel Blount.  The signings will be at the TSE store at the Mall at Robinson. Get your details and pre-sale items on tseshop.com where every day is game day.

Thanks To: Colin P for photos and Instagram story

#YaJagoffPodcast/ These Two Jagoffs Went to the Market

Yakkin’ With YaJagoff (Re-Run) “Singing on the Gateway Clipper”