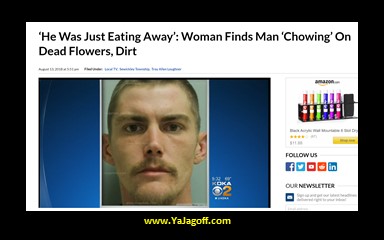 Remember “Backwards Day” at elementary school? Everything was backward.. ESPECIALLY your clothes! Well, me thinks that good ol’ Troy Allen Loughner of Westmoreland County was reliving a childhood special moment.

NOTE: KDKA video report is worth watching.. the owner of the porch AND the editing provides fantastic entertainment value.

Troy Boy.. what in theeeee world are you doing eating dead plants?  Did that plants and dirt taste just like Kale Chips that everyone lies about being good?  I wouldn’t know! I have never eaten Kale Chips OR dead plants mixed with dirt.

We DO applaud you for, despite having your drawers on backward, that you somehow negotiated getting a belt on!  At least ya had the decency to not show anyone your stanky skivvies!

Here are a coupla tips to be a better burglar OR neighbor:

To be a better burglar:

To be a better neighbor: (this one’s an easy one)

Don’t steal from anyone.. but especially your neighbors and especially-especially from the neighbors that know your face… Ya Jagoff!