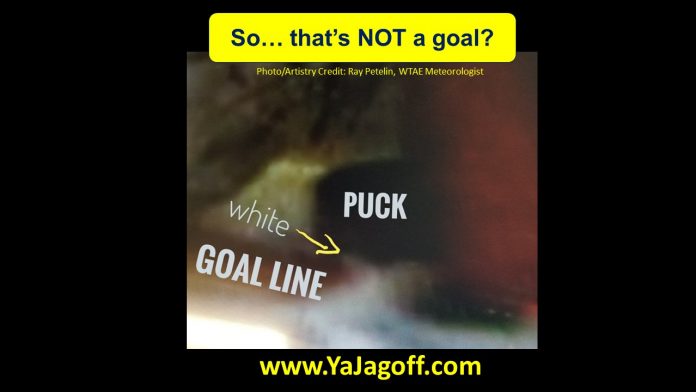 First, not to say that the Pens didn’t suck against the Caps last night. They played defense like me in my over-40 league as if both of my legs fell asleep and I was pre-loaded with Valium. On top of that, I typically don’t like to subscribe to saying the officials suck. That said, guess who the Jagoffs are today?

First, see the tweet from WTAE’s Ray Petelin, who is quite proficient with his Jagoff-estrator skills (creating the featured artwork of today’s blog post.)

I look at grainy weather imagery to make sense of the atmosphere… Here’s my interpretation of grainy, replay imagery… Not that it matters. I will also say, I’m not a hockey official, but I did drive by a Holiday Inn Express one time. #StanleyCupPlayoffs2018 #Pens #caps pic.twitter.com/oqFI6D5NVf

Hey on-ice officials of the Penguins/Caps game and lazy-pizza-eating-Toronto-based-off-ice officials…not sure what YOU looked at when reviewing the Hornqvist net-stuffer yesterday.

Certainly, the on-ice officials can pass the buck along to the Toronto peeps because that MIGHT have been tough puck to keep track of.. but…to the off-ice-Toronto-based officials… are ya looking at these plays, on your smart phone, while your shopping with your spouse in the middle of a mall?

In the meantime, at your Toronto desk, put down those nachos, pizza, and Tim Horton donut holes, wipe your greasy lips and hands, put your READERS on and get the calls right, YaJagoffs!