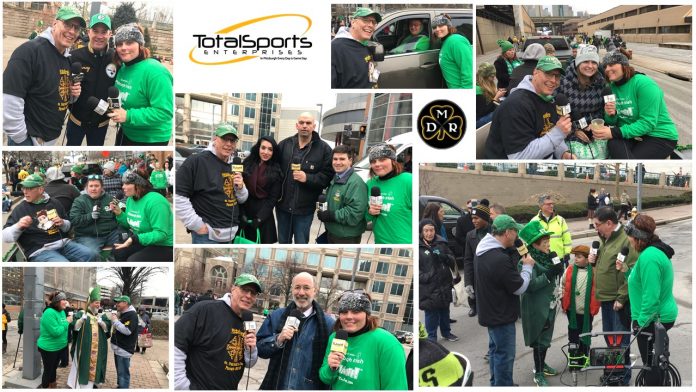 Summary: The official wearin’ o’ the green day finds John and Rachael mobile in the middle of the 2nd biggest St. Paddy’s Day parade in the country, right here in dahntahn Pittsburgh! So, we shamrocked and green tinseled a trailer, grabbed some pals and interviewed the finest of Pittsburgh Irish at the annual parade. Catch our mobile chats with St. Patrick from Pittsburgh, the official Peduto leprechaun, Peduto himself, the governor, and Jim Rooney, plus a visit from Femme on our float.

Click the play bar below to listen to the podcast.

If you don’t see the play bar, above, in your email, CLICK HERE to listen while you work, rest, walk your dog or shovel snow!

01:06 Intro as a media outlet at the parade talking about how exciting it was to fully participate in the parade from giving things away to interviews with the Pittsburgh royalty.

SPONSOR: Total Sports Enterprises serves as our sponsor of the podcast and the float for this special holiday episode. TSE will bring Bryan Rust to the Foundry Table and Tap at the NorthShore this Saturday. Get general admission and VIP tickets at tseshop.com along with all of your black and gold needs.

01:06 St. Patrick himself dishes on the history of St. Patrick and gives a quick blessing for the Irish in this special day.

04:41 We welcome Councilman Corey O’Connor with a report on the mass of attendees and the most important item to have on parade day! Plus, John and Gisele Fetterman have no O to claim in their name, but are proud to be from Pittsburgh and are declared honorary Irish just for parade day!

08:39 We get the privilege to talk it up with Jim Rooney about the special first of honoring Dan Rooney on parade day for all of his contributions to Pittsburgh. He dishes on his dad’s pilot days and a unique conversation with another known Irish figure.

14:48 Governor Tom Wolf is elated that John and Rachael pronounce Lancaster the correct way. The Governor boasts of Pennsylvania growth, corrects Pittsburghese and gives a quick pregame glimpse in the life of the governor before he gets pulled away for another important interview.

19:48 Cousins Peggy and Sean talk about 28 and seven years of celebrating Irish traditions since Peggy is the official leprechaun for Mayor Bill Peduto and Sean is more than a sidekick! He discusses not letting his grandmother get arrested years past!

22:59 Peggy and Sean stick around and chat with the mayor about why this parade is above the others Pittsburgh hosts, what Sean eats for St. Paddy’s Day, Mayor Peduto’s pregame ritual and Peggy’s outlandish outfit as the mayor’s lead leprechaun.

27:16 Femme Frugality is riding 0n the float with the other cast of jagoff characters and hits us with some multiple choice questions about Ireland vs USA. John wins the q&a but we all win thanks to Femme’s informative blogging about Pittsburgh’s economical stature.

38:36 Cousin Lisa leaves the trailer bull pen of jag offs and better explains the concept of Flat Lisa who basically is an icon who pops up anywhere to give out discounts for Total Sports Enterprises in store and online.

Thanks as always to Frank, Hannah & Wayne of the Pittsburgh Podcast Network, Josh Nuttall and Cousin Lisa from TSE, Amy Mauk from Entercom, Best friend Jenn, Favorite son Dom and the Hurlers as well as Ken our amazing driver!

SPONSOR: Total Sports Enterprises serves as our sponsor of the podcast and the float for this special holiday episode. TSE will bring Bryan Rust to the Foundry Table and Tap at the NorthShore this Saturday. Get general admission and VIP tickets at tseshop.com along with all of your black and gold needs.