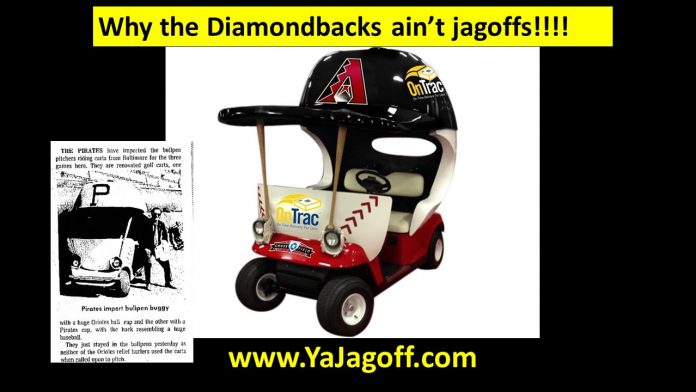 As we say… sometimes the phrase “Ya Jagoff,” can be a term of endearment!  Example: “Hey buddy, that’s a pretty sweet Pierre LaRouche jersey you have tucked into your good Sunday jeans, Ya Jagoff!”

While I was a total fan of the Jared Hughes run from the bullpen to the pitcher’s mound, (I always wanted to challenge him to a run down the grocery store frozen pizza aisle) Check this out… I kind of remember these things and, my memory is, they were awesome!

No idea why these things are coming back! Some say it is to speed up the game but, I doubt that! I think it’s more of a factor of baseball park grass cutters and field groomers are getting older and need jobs… so.. instead of them leaving baseball and becoming door-openers and door-holders at local funeral homes, driving the bullpen golf carts are making a comeback.

Either way… we love it!  Finally.. something about baseball to be excited about after the opening day beers wear off. Nice work, Diamaondbacks… YaJagoffs! (used in the term of endearment form!)