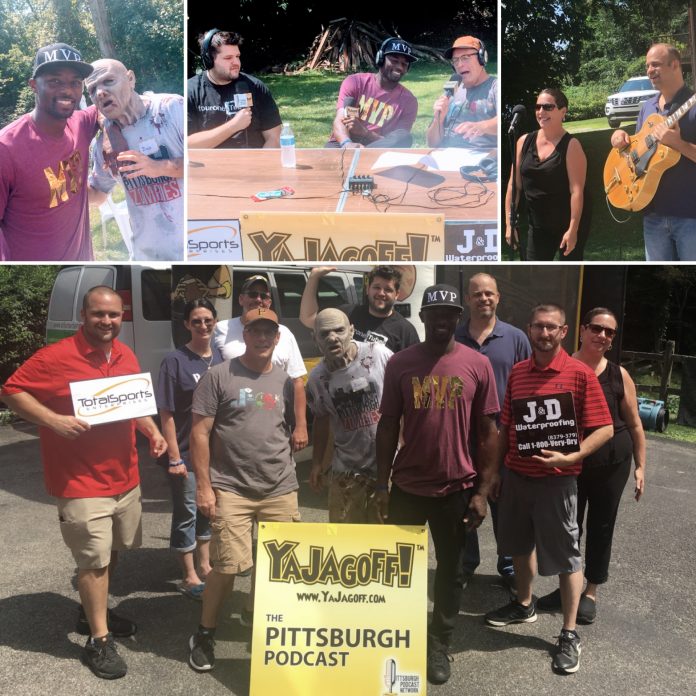 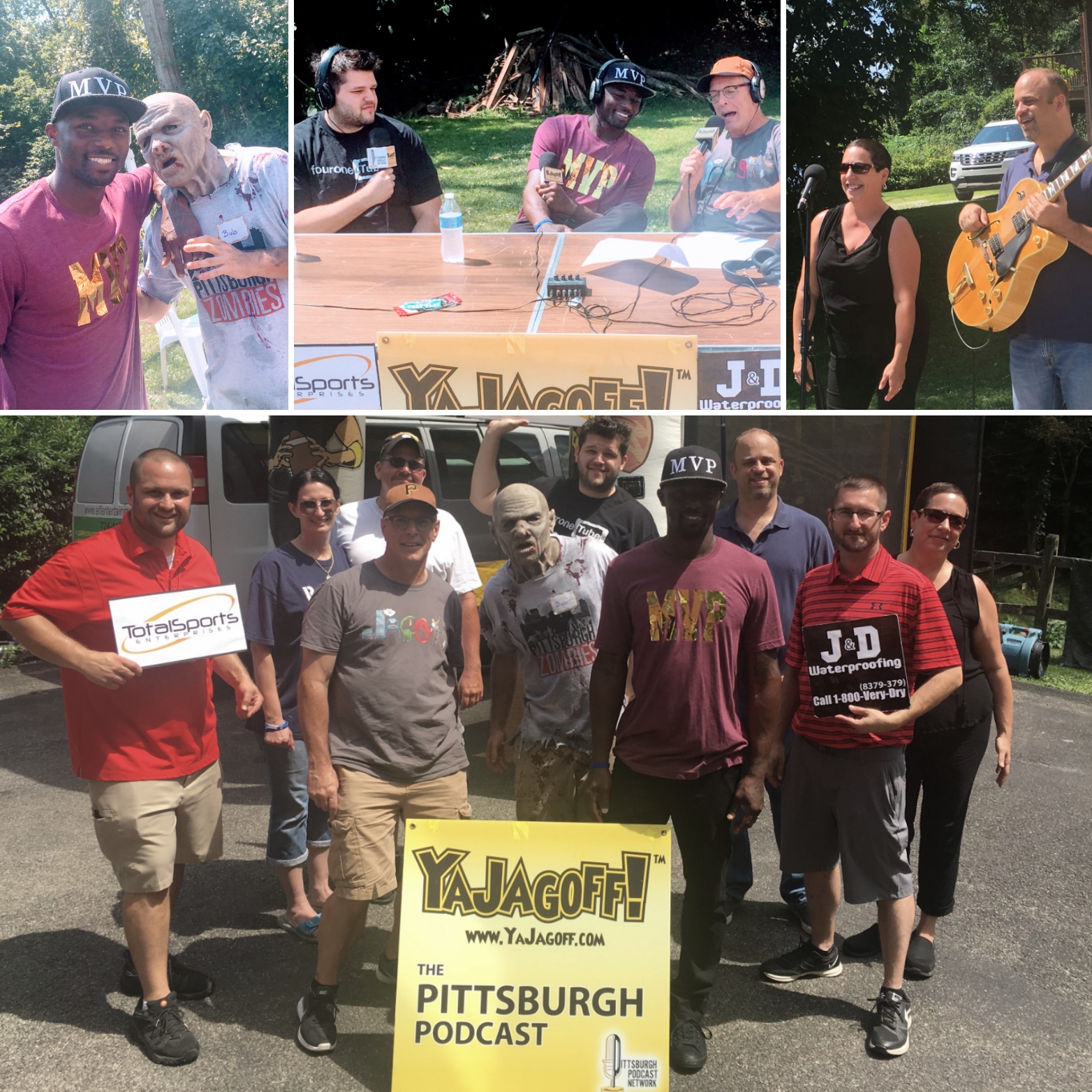 We finished the 2017 J&D Waterproofing Summer Porch Tour with a huuuuge party and Super Bowl 43 MVP, Santonio Holmes, comedian Ray Zawodni, “Bub” the zombie from The Scarehouse. Jay Weaver and Olga Watkins, from the Olga Watkins Band, crushed the music. Thanks to Everyone Loves Fun Entertainment who brought the Quarterback Blitz, 5 Generations Bakers who supplied the Cinnamon Swirls, Ernie Ricci who gave us hot sausage for breakfast and The Foundry Table & Tap for the mimosas.

Don’t see the player bar above in your email?  CLICK HERE to listen to the podcast while you work, rest or play.

01:16 The last J&D Waterproofing took us to Robinson Township, the home of Tom and Carlotta. It was excruciatingly hot but we all endured. Comedian Ray Zawodni was the guest co-host once he got through Parkway West traffic.

SPONSOR: Total Sports Enterprises will be at the Pittsburgh Downtown Partnership Farmers Market this Thursday and next for your chance to win an office makeover worth $2500 and to score some of your own favorite sports pieces. September 16th Biiiig Signing! Super Bowl MVP Santonio Holmes, James Conner, Sean Davis, JuJu Smith Schuster! Check tseshop.com for details.

02:38 We meet the homeowners and all of our sponsors. I big game of “throw a tennis ball over the hill into the pool” has already started. It’s a family game so don’t worry if you have no idea what that means.

11:00 Santonio Holmes got heavily involved in the “throw a tennis ball over the hill into the pool” and was quite competitive. He’s raising money for “Strikes Against Sickle Cell” through his III & Long Foundation. Make sure you donate and be ready to come bowl with 32 of his celebrity friends on October 10th at Paradise Island Bowl. Stay tuned for details!

29:28 “Bub” a zombie from The Scarehouse came to personally present Tom and Carlotta their special VIP tickets. And we talked to him about how he died and his “tastes” in humans.

36:47 Comedian Ray Zawodni tells us about his recent career change, and his new podcast about quitting jobs, “No Weeks Notice” – plus, he talks about his uncle’s reaction to meeting KDKA’s Bob Pompeani!

43:40 Olga Watkins and Jay Weaver crushed the music today. If you’re not a fan, you’re a Jagoff! Well known years ago for their Steelers song, “Drink Up Yinz Bitches,” but they are the best funk, blues, soul, reggae, jazz band in town. Listen/purchase their songs here and follow Jay’s recording studio, SoundColor Productions.

52:43 We get to meet the Pittsburgh Podcast Network intern, Hannah Lapiska. She has been on 3 podcasts so far and STILL likes us!

Thanks to all of the Porch Tour prize peeps

Passes for The Arcade Comedy Theater

One Night Stay, The Allegheny Inn

SPONSOR: Total Sports Enterprises will be at the Pittsburgh Downtown Partnership Farmers Market this Thursday and next for your chance to win an office makeover worth $2500 and to score some of your own favorite sports pieces. September 16th Biiiig Signing! Super Bowl MVP Santonio Holmes, James Conner, Sean Davis, JuJu Smith Schuster! Check tseshop.com for details.

VIEW the Episode MovieMix Video:
Thanks, To:

#YaJagoffPodcast/ The 6 Degrees of Hamilton Episode