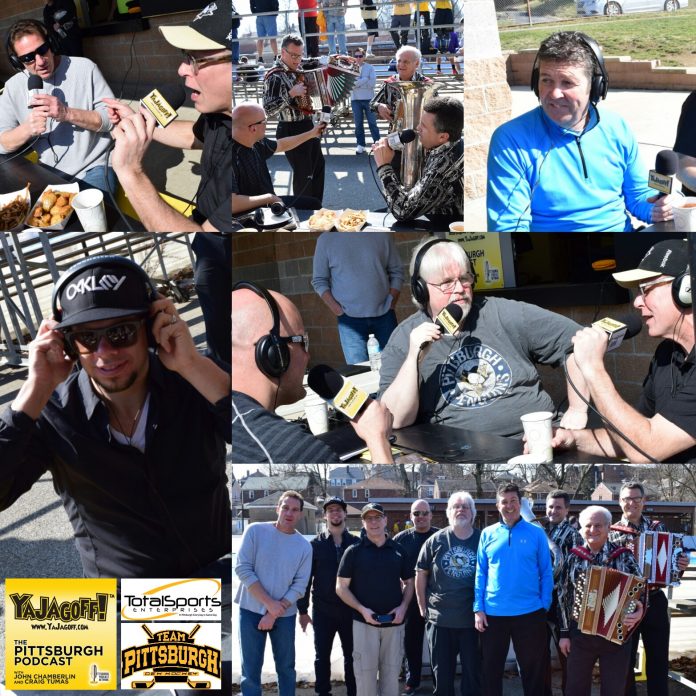 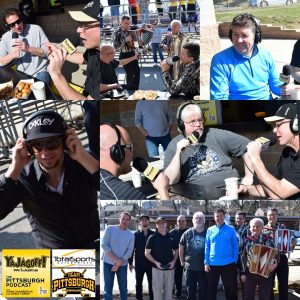 What hockey skills might be most useful in the act of grocery shopping? Well, we talk about that AND we do a polka sing-a-along on this episode from the best place for kid’s Dek Hockey, Team Pittsburgh in Brighton Heights. Guests that played along: Penguin alum Tyler Kennedy, 105.9X’s “Super Genius” Mark Madden, comedian John Knight and roller-blade hockey buds, the Polka Playing Palastros!

LISTEN to the Podcast show right here below:

If you don’t see the player  bar above, click the one below to take you to the page to listen while you work!

00:40 It’s mid-February and we are outside in t-shirts at the Team Pittsburgh DEK Hockey facility in Brighton Heights.

SPONSOR: Total Sports Enterprises. As a collector you want to be sure you are buying only authentic memorabilia, that is why we offer a 100% money back authenticity guarantee! All of our signed memorabilia come with a tamper proof hologram and Certificate of Authenticity.

02:08 Who and what is Team Pittsburgh DEK Hockey? Registrations are on now. They have at least 3 nationally ranked players that have come from there! But wait… what did Team Pgh’s Mike Allbright due to influence Dan Marino’s sports career? And what hockey skill would he deploy in grocery shopping if allowed?

08:52 Mark Madden, the “Super Genius” from 105.9X FM. Does he love hockey or wrestling better? Who’s the smartest person on radio? And, putting a “fan hat” on, who are his two favorite hockey icons? (HINT: This is answer could get you 2 tickets to a TSE signing on 2/23.)

22:20 Pittsburgh Penguins alum, and Stanley Cup Winner, Tyler Kennedy. How’s life in Retirement? Does his wife Brandi have a Honey-Do list for him? What hockey skill would he utilize in grocery shopping? www.TheRealTK.com

37:18 Comedian John Knight… he’s claiming responsibility for the great February weather and wondering why we tied polka music to DEK hockey. “What Aggravates Me”

42:45 The Palastro Family…. Tom, Gregg and Jeff. They entertained the entire Team Pittsburgh facility with various polkas including a sing-a-long! You can purchase their CD here. Email us if you want to hire them john@YaJagoff.com

NEW LISTENING PLATFORMS
* No Longer available ON SoundCloud or IN the Pittsburgh Podcast Network Channel Feed.

SENIORS GIVE NEW MEANING TO ‘PARKING’

Didn’t Have To Wait to Get To Harrisburg To Find a...

New Video: Jaggin’ Around With Mikey O’Malley for Cuddles for Kids

Yakkin’ With Ya Jagoff – XPogo, Pogapalooza

YaJagoff Podcast 52, The Wheeling Feeling at the Wheeling Nailers Game