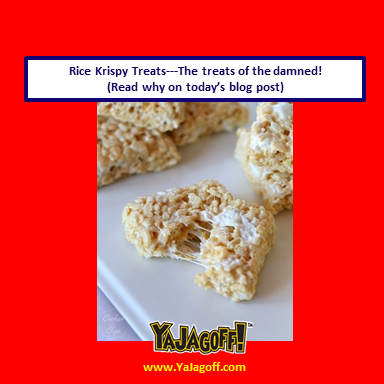 I told this story at @AlexanderFIV’s house on Saturday.

Rice Krispies Treats… those simple little treats that taste soooo yummy.  Even when they are stale from sitting in a hot car or in a Ziploc baggie at the pool, always yummy.  How hard can those things be to make?  Here’s my experience with making them the first and only time I ever attempted a few years ago.

O.K…. we’re coasting.  The kitchen smells good. Aaaand the kitchen looks good because the dog is done licking up all of the Rice Krispie shrapnel and dropped marshmallows that had fallen to the floor.

I’m working it… working it … I’m getting frustrated.. it’s not working!  The recipe said work quickly so, I go in full force.  I drop the utensils (one of which falls to the floor for the dog) and go in with my bare hands. This is the point at which I realize how HOT the mixture is and how it will not let go of the skin on my fingers and hands!!!

New step to consider inserting into recipe? Have bowl of ice-cold water close at hand to remove scalding mixture from bare hands.

Once the tar-like substance was cleaned from my skin (and some of my skin removed from its underlying skin) I dumped the bowl of semi-mixed butter/marshmallow/Rice Krispie substance in to a baking pan and used a rolling been to smash it into a flat surface.  Yes, used waxed paper between the gooey substance and the rolling pin… I mean.. I’m not an idiot in the kitchen!

I let the pan of sugary molten lava (approximate temperature of what converts pig iron to liquid steel) sit and cool while I applied Aloe-burn salve, butter and ice-packs to my hands.  At this point, I started to realize how many things in the kitchen had the cement-like Rice Krispie mixture stuck to it from my “Oh, $h!t, my hands are on fire” dance.  The fridge handles, the oven handle, the dish-drying towel and even the oven hood had to be scraped clean.

Within an hour.. my kids were enjoying some Rice Krispie treats!  Some were ½ inch thick and some were 2” thick.

My one additional suggestion to the standard Rice Krispies Treat  recipe after my experience?  The very first step should be, “Go buy these sonzabitches somewhere or get your kids to eat vegetables, Ya Jagoffs!”

DON’T CROSS THE MOATS IF YOU CAN ‘CATCH’ A BREAK !