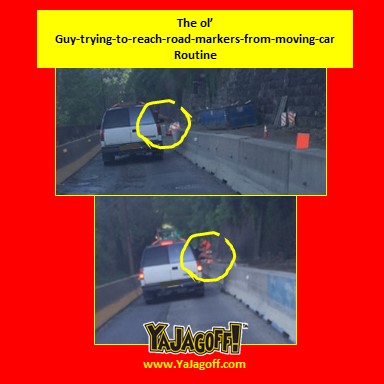 As a public health and safety person, you very rarely get to witness some of the stupidity that occurs in some of your patient’s lives that leads up to why they have ended up in your ambulance.  Given, not everyone does something stupid but, many do.  Some are accidental mind slips and then some are just pure stupidity.

At first I was loving the fact that they, like many other Pittsburghers, had tied a piece of furniture to their big SUV. Not sure if it was full OR if they were just trying to recreate the National Lampoon, “Vacation” movie’s “Aunt Edna” scene.

But then.. while they were driving through the construction zone at 35mph, the passenger decides that it’s a great idea to reach out to try and grab the orange and white road markers.  Even to the point that he scoots out of the window past his waist ending up perpendicular to the window.

Hey..whaddaya say we leave the invincible stuff to the Avengers, Ya Jagoffs!

The Curse of the Terrible Towel