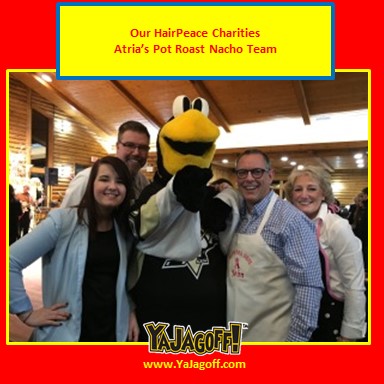 SaturDEE night, about eleventy-hundred people got together to eat and drink to raise money for HairPeace Charities, a local non-profit group that helps women purchase wigs and provides emotional support as they to through their cancer treatment.

Keep reading… at the end of this post, there will be a chance to win your very own Pot Roast Nachos appetizer from Atria’s (official pronunciation ATria’s as in the Pittsburghese term n’at vs. how some say ATEria’s.)

I was paired up with former KDKA-Radio-now-WNEW news guy, Bill Rehkopf, Taylor and Tony from the PNC Park Atria’s and Linda, a 6-year cancer survivor. We served Atria’s Pot Roast Nachos in honor of my bud Liz Evans who’s working her way through treatment.

Tony and Taylor did their best to show us how to properly stage the table before the crowd came in. 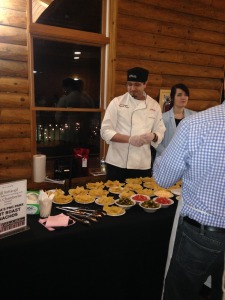 Nacho chips plated first.  Then place the marinated pot roast meat over the chips making sure every chip has something on it.  A drizzle of sour cream, shredded cheese, topped with diced tomatoes and a few jalapeno pepper rings. Boom!

The table never looked that neat again.  Tony, Training and Development guy from Atria’s had to throw his hands up at some point. Neatness was thrown out the window. It was all about the enticing verbal presentation of the product with Bill’s radio voice. Nobody seemed to be deterred by our messy table.  By the way, Tony and Taylor are the ones who officially trained us in the ATria’s vs. ATEria’s pronunciation. 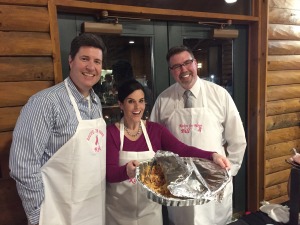 Our neighbors were Rick Dayton and Kim Gable of KDKA-TV.  Bill went over to borrow a cup of sugar.  They were kind enough to take a pic with him because they had no sugar but the pasta and sausage which was AWESOME but not nearly as awesome as our pot roast nachos. 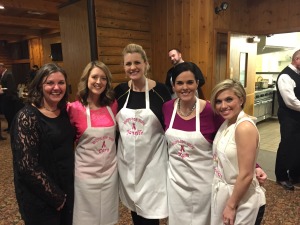 Bonny Diver, event and HairPeace organizer, Cara Sapida (WPXI-TV), Janelle Hall (WTAE-TV), Kim Gable and Heather Abraham (KDKA-TV) doing a friendly pose.  Shortly after the 4 TV ladies arm wrestled for a chance to win 29.8 bonus Sweeps Week points for their station.  The best part of this pic is the dude in the back photo-bombing with that I-don’t-understand-you-humans-tilted-dog-head look.

Val served Kelly’s crab and asparagus quiche. Don’t worry about what “real men” do.  When you’re at Kelly O’s place, eat the quiche.  Just talk about the Steelers, Pens or Pirates when you’re eating it if you feel awkward. 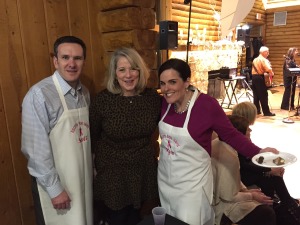 Look at Kim Gable (KDKA-TV jumping in another pic! She must have thought I was on the Yearbook staff.  She told me she was also in the FBLA, AV and Chess Clubs too!

It was a great night! And a ton of money was raised to help HairPeace Charities.

Big thanks to Atria’s (Tony, Taylor and their gang) for supplying the food and the grand attempt at on-site training for Bill, Linda and I.

Please tell us below if we did you a public service by officially clearing up the ATria’s vs ATEria’s pronuncations thingy.

NOTE: Atria’s is not responsible for this contest or prize.

Prize will be purchased and provided by YaJagoff.com.  The prize will have no cash value.

Do Not Pass Go OR the Duck, Go Directly To Jail!