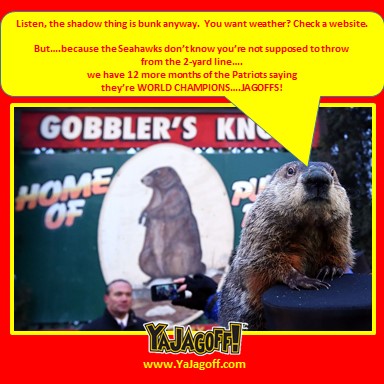 Worse than the Steelers not being in the Super Bowl was the Patriots.. well… Brady and Belichick specifically…won another Super Bowl.  What makes it even MORE WORSER is the fact that the Seahawks were 2 yards away from beating the Patriots… thusly throwing Tom Brady and his 2 interceptions and Bill Belichick and his hoodies into football lure for just not being able to finish again.

Pretty sure that the entire area of Western Pennsylvania could be heard, in unison, yelling “YA SUNZABITCHES.”

Seattle coaching staff… you have a guy that runs like a Monster Truck!  What in THEEEE hell were you thinking?  How selfish of your play-calling to make Steelers fans have to endure Brady and Belichick sporting rings, Ya Jagoffs?

How Was “Hamilton,” You Ask?