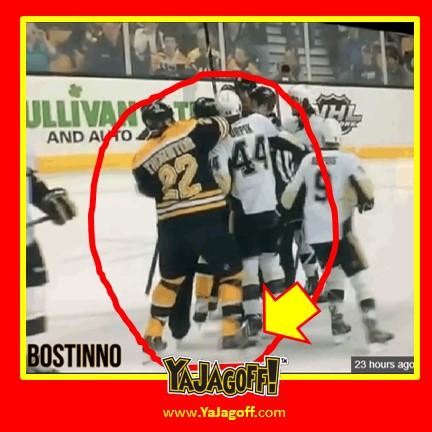 Saturday night, the Penguins went to Boston to play the Bruins.  In the first period:

1) Pens defenseman, Brooks Orpik, takes out a Bruins player with, some say was a questionable, thumping hit.

2) The Penguins’ James Neal appears to knee the Bruins’ “Jagoff in Residence” Brad Marchand while he’s kneeling on the ice. Play stops.

3) The Bruins’ Shawn Thornton is sent to the ice during the play stoppage and slew foots Brooks Orpik to the ground then proceeds to punch him in the face, with his gloves on, and renders Orpik unconscious… and eventually he receives a stretcher ride off of the ice.

The video of the play is below.   The Orpik hit is at the 28 second mark.

All of the stuff listed above… bad.. bad.. and more bad.  But….Shawn Thornton’s Epic-Orpik-Knock-out REAL bad.  Orpik had zero chance to defend himself.

If you read it, you will see tons of comments of Boston fans calling this Kalman out.  But the one that dragged my eye down the page, to the point that my eye was sticking to the computer screen, was this comment:

time to attack those girly losers in pittsburgh some more. Hey muslims, we have a target for your dirty bomb.

Wait, are you serious?  Hey you illegitimate son of Bill Belichick and a random Salem Witch, are you from the same Boston that everyone supported after being bombed??

To sum this up, Brooks Orpik came home with the Pens that night after a hospital visit.  And one has to believe that he is frustrated beyond belief that he didn’t get to throw a punch at Thornton.  Lots of pent up anger!!!  I pity anyone who cuts Orpik off in traffic, or takes the last mall parking spot away from him or breaths wrong in his general direction.

In the meantime Shawny T… good luck sleeping.. we saw your mea culpa video but not going to publish here on purpose.  Trust me from my Catholic School Days.. guilt is a bitch!  In the meantime, stop watching RoadRuner/Wile E Coyote re-runs… when people get hit like that in real life, they don’t just blow into their thumbs and re-inflate themselves.

If ya want to show Orpik and the NHL you’re sorry, go punch the @#@$ out of that guy Dave Silva how made the “bomb Pittsburgh” comment and even further embarrassed your city, YA JAGOFF!!!