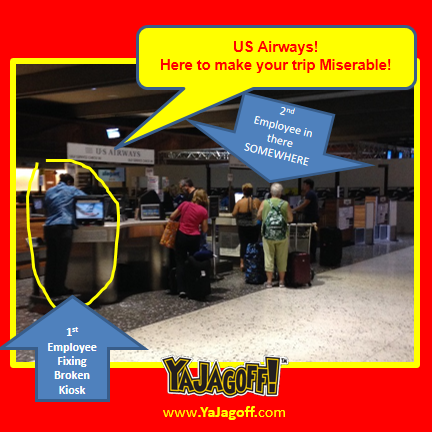 Soooooo spent a few days in Hawaii last week.  It was great timing since an early cold-weather-rain-kind-of-sleet-kind-of thing hit Pittsburgh while I was in 86 degree weather!  It was great!  I was given the opportunity to speak at the 2013 Hawaii Social Media Summit .. talking about the blog!

Everyone was fantastic.. the Aloha Spirit was everywhere… EXCEPT for at the US Airways check-in counter at 10pm on a Saturday night.

NOTE: The staff were doing their best.. the bad news is there was not enough of them!

Lots of people in line.

Oh wait, did I say that there were 2 US Airways flights checking in at the same time?

There were 2 separate, full, 757 flights departing within 20 minutes of each other and all of us were in line together to use the FOUR kiosks and be assisted by the THREE staff members.

Did everyone know how to use the kiosks?  NO!

Did one of the kiosks break while approximately 700 passengers were trying to check in on the FOUR kiosks?  YEPPIR! (Noted by the Jagoff-estrator graphics in the pic above)

Did one of the 3 staff members have to divert her attention to the broken kiosk vs. assisting customers who didn’t know how to work the kiosks?  Yeppir.. (but tough call for her make under serious pressure)

It took almost an hour to get myself to a kiosk and there were still people behind me.

So, not only were customers distressed over having to stand in line for, what seemed to be, the same length of time as it takes to actually FLY to Phoenix… but some customers were distressed over how to use the check-in kiosk.   Keep in mind, these are the same people that struggle over scanning celery at the grocery store self check-out line and you think it’s OK to leave them alone while they try to type in their name, choose how many bags they’re carrying and make a choice on whether or not they want to buy more LEG ROOM???

Did you not expect all of us that night?  Was this some kind of random #HeyLetsAllSuddenlyFlyToPhoenixAtTenO’ClockTonight Tweetup or Orbitz flash mob??

And…you do know there are these thing-a-ma-jiggers called computers where you can look up these thingies called RESERVATIONS, right?  They actually tell you how many might be coming to the airport at a certain time!!  Crazy stuff, huh??

Hey US Airways, otherwise known as “Let’s Make As Many People As Miserable As We Can Airlines,” I’m actually shocked that you didn’t have your staff of 3 doing even MORE things…. like handing out those hugely profitable US Airways Credit Card Applications, riding unicycles or juggling 3 bowling balls while eating an apple because they didn’t have nearly enough to do while 700+ people were trying to get home, Ya Jagoffs!

Watch the video from the Summit after-party:

Doubletree Internet And Other Things We Don’t Need