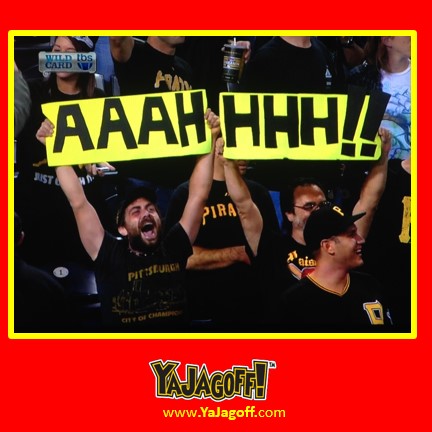 Well, these guys say it all!!  Its like what your grandpap would say after letting out that fart he’d been holding, after Thanksgiving Dinner, until your girlfriend went home.

But the game didn’t come off perfectly.  Twice in the same inning, Pittsburgh fans touched a ball in play.  One guy MIGHT have caused a home run by trying to catch a ball…another guy, stuffed in a what looked to be a petting zoo pen along the first base side, touched a ball hit by the Reds after it was called fair. No play could be made by the Pirates.

If you didn’t see either play, please submit a note from your mother as to why you were absent, and then click the video below from SportsVine to see what happened.

“Folks, it’s postseason, can we bring our ‘A’ game?” (From SteelRenegade#7)

After watching that, I called Bob Nutting on his cell phone and said, “We don’t know how to behave. Please UN-sell all front row seats for the next series!”

And then, ya have a guy jump off a bridge…(video credit to @DaFranchize from Twitter)

Twenty years of pent up pressure….gone in one night!!!!  Even the 40-foot Rubber Duck (@Ya Quackoff) was taunting people on Twitter.

“Boy if I only had a stronger flash on my camera phone to get pics of you insane @Pirates fans. Did they just let you all outta jail??”

Bottom line, none of these people get called out… cuz we won.  Had there been a loss?  Well, there wasn’t.

Bitchin’ About The Pirates