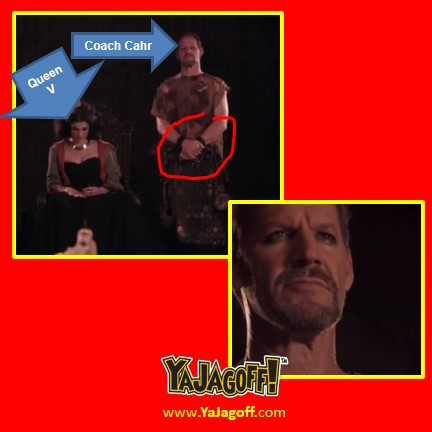 Have you worn your girl friend’s dress?  Her shoes? Gone to the grocery store to get feminine products for her because she is a poor planner?  Skipped a night’s sleep to sit up all night with her 4 sick cats?  Have you given in to her pleads to carry her 155lb. dog around the neighborhood so that it could go poop and get some fresh hair despite having 2 arthritic hips?

Well, Bill Cowher has set a new level for the rest of us men!

Apparently Coach CAHR is dating a gothic singer called “Queen V.”  And somehow, she talked him into donning some mascara, a medieval outfit and some leather handcuffs and standing around in her latest video. (see full story on KDKA-TV website)

Remember when we thought it wouldn’t get much more weird-er than that look Coach CAHR had that craaaaaaaaaaazed I’ve-Lost-My-Mind look on his face when  he was all excited winding up the Hurricane Siren for the Carolina Hurricane playoff game?  It got worse.

But on the other hand, it is great to know that “The Jaw” has a special person in his life.  And she must be an AWESOMELY CRAZY-WEIRD hook-up… like breaking lamps and hot candle wax kind of stuff if he’s putting on more make-up than Marylin Manson and standing around in a music video.

Coach.. we hope you’re happy.  We are glad that you’ve found someone special.  But paaaaaaaaaaaleeeeeeeeeeeeeeeeeeeeze…..you’re the guy that put the fear of 5 gods into huge football players just by giving them THE STARE!  When Queen V asked you to do that, could you NOT  look her in the eye, give her that patented jaw-maneuver and say, “Hell No?”  Ya… Ja…. (wait…..I can’t do it….my fingers are trembling…I can’t pull the trigger on the punch line… it feels terrible… urghhhhh… maybe if I had a girlfriend that forced me to do it I would but…..)

Any of you have a story that you will admit too about the silliest thing a partner got you to do?????