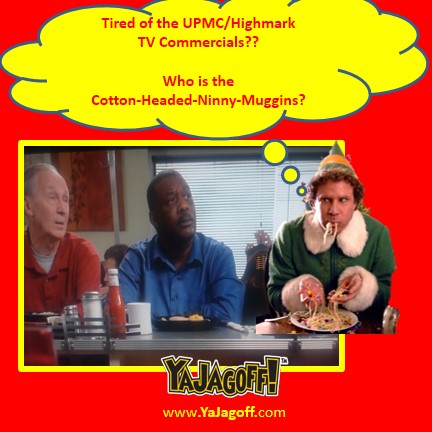 For those of you that are still in the Western Pennsylvania area, you know about the fight between Highmark and UPMC and how it has spilled over on to our television sets and internet.  If you’re an ExPat, be glad that you’re not forced to watch this mess.

To both sides have a point?  Yep.

Do we care who’s right?  Nope.. it’s waaaaaaaaaay too in tense for this silly blog.

Do we care when the TV commercials come up incessantly on our televisions and online vidoes… SO MUCH THAT we are begging for mud-slinging political ads?  The kind where they use silly words and graphics like the one below?  YEPPPIR!!!! (see our previous Jagoff post about Political Ads here.) 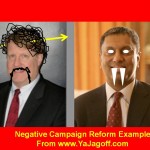 The point is, both UPMC and Highmark have taken this argument to the street… each trying to gain public support for their cause.  Unfortunately, even the people that are passionate about one side or the other are getting tired of seeing expensive commercials, at prime-rate time …. as, at least one of them, laid off staff stating the need to cut budgets.

Well, we took a shot at making these TV commercials more palatable and interesting.  We have re-mixed one UPMC and one Highmark commercial for your pleasure!  And who is HAPPIER than Will Ferrell in the movie “Elf?”  He makes everyone get along!  Watch the videos below.

Remake of Highmark “3 Guys In A Diner” Commercial (If you don’t see the video box below, click HERE to watch.)

Remake of UPMC’s ” “Lady On The Phone” Commercial (If you don’t see the video box below, click HERE to watch.)

Ya know what we say?  Let’s do something REASONABLE to settle this thing once and for all!!!    Let’s have a corn-hole tournament or a chili cook-off or some type of winner-take all Fantasy Football tournament!!!  Or how about sitting down with a beer and a Primanti’s sandwich???